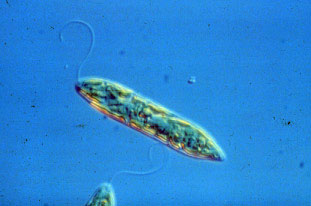 Fig 1. Euglena: a eukaryote with a flagellum. 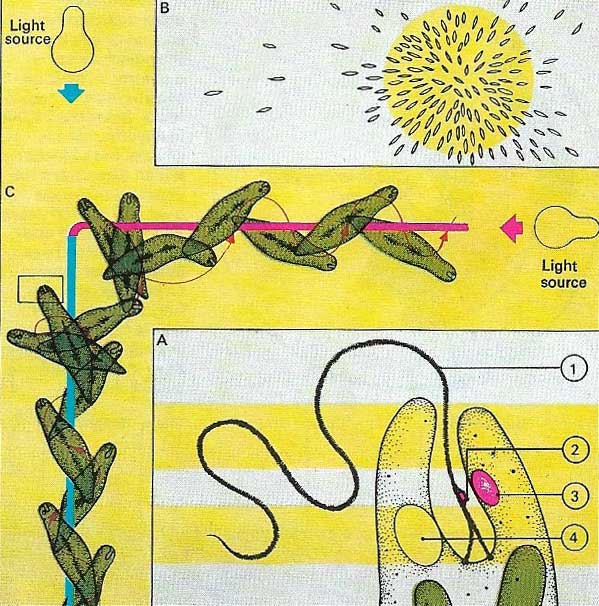 Fig 2. Like other living creatures, Euglena can respond to its environment, move and feed. Euglena (A) is equipped with a whip-like flagellum (1) whose action aids movement. Light is detected by a photoreceptor (2) which is periodically shaded by a stigma (3). Excess water within the cell is expelled via a contractile vacuole (4). Euglena reacts to light (B) by moving towards it in a spiral fashion (C), keeping its photoreceptor illuminated but periodically shaded by the stigma. The creature can change direction if the light source is moved from one position to another.

A flagellum is a whip-like organelle specialized for locomotion. Flagella are found among all three domains of life – bacteria, archaea, and eukaryotes – but the structure of the appendage is different in each of these domains.


In bacteria, the filament is composed of the protein flagellin and is a hollow tube 20 nanometers thick. It is helical, and has a sharp bend just outside the outer membrane called the hook which allows the helix to point directly away from the cell. A shaft runs between the hook and the basal body, passing through protein rings in the cell's membranes that act as bearings. Gram-positive (see Gram's stain) organisms have 2 basal body rings, one in the peptidoglycan layer and one in the cell membrane. Gram-negative organisms have 4 rings: L ring associates with the lipopolysaccharides, P ring associates with peptidoglycan layer, M ring is imbedded in the cell membrane, and the S ring is directly attached to the cell membrane. The filament ends with a capping protein.

The bacterial flagellum is driven by a rotary engine composed of protein, located at the flagellum's anchor point on the inner cell membrane. The engine is powered by proton motive force, i.e., by the flow of protons (i.e., hydrogen ions) across the bacterial cell membrane due to a concentration gradient set up by the cell's metabolism (in Vibrio species the motor is a sodium ion pump, rather than a proton pump). The rotor transports protons across the membrane, and is turned in the process. The rotor by itself can operate at 6,000 to 17,000 rpm, but with a filament attached usually only reaches 200 to 1000 rpm.

The components of the flagellum are capable of self-assembly in which the component proteins associate spontaneously without the aid of enzymes or other factors. Both the basal body and the filament have a hollow core, through which the component proteins of the flagellum are able to move into their respective positions. The filament grows at its tip rather than at the base. The basal body has many traits in common with some types of secretory pore which have a hollow rod-like plug in their centers extending out through the cell membrane, and it is thought that bacterial flagella may have evolved from such pores.

Some species of bacteria (those of Spirochete body form) have a specialized type of flagellum called axial filament that is located in the periplasmic space, the rotation of which causes the entire bacterium to corkscrew through its usually viscous medium.

Anticlockwise rotation of monotrichous polar flagella thrusts the cell forward with the flagellum trailing behind. Periodically the direction of rotation is briefly reversed, causing what is known as a tumble, and results in reorientation of the cell. The direction at the end of the tumble state is random. The length of the run state is extended when the bacteria moves through a favorable gradient.

The archaeal flagellum is superficially similar to the bacterial flagellum; in the 1980s they were thought to be homologous on the basis of gross morphology and behavior. Both flagella consist of filaments extending outside of the cell, and rotate to propel the cell. However, discoveries in the 1990s have revealed numerous detailed differences between the archaeal and bacterial flagella; these include:

· While bacterial cells often have many flagellar filaments, each of which rotates independently, the archaeal flagellum is composed of a bundle of many filaments that rotate as a single assembly.

· Bacterial flagella are thicker than archaeal flagella, and the bacterial filament has a large enough hollow tube inside that the flagellin subunits can flow up the inside of the filament and get added at the tip; the archaeal flagellum is too thin to allow this.

These differences mean that the bacterial and archaeal flagella are a classic case of biological analogy, or convergent evolution, rather than homology.

The eukaryotic flagellum, also called a cilium or undulipodium, is completely different from the prokaryote flagella in structure and in evolutionary origin. The only thing that the bacterial, archaeal, and eukaryotic flagella have in common is that they project from the cell and wiggle to produce propulsion.

A eukaryotic flagellum is a bundle of nine fused pairs of microtubules doublets surrounding two central single microtubules. The so-called "9+2"" structure is the characteristics of the core of the eukaryotic flagellum called an axoneme. At the base of a eukaryotic flagellum is a basal body or kinetosome, which is the microtubule organizing center for flagellar microtubules and is about 500 nanometers long. Basal bodies are structurally identical to centrioles. The flagellum is encased within the cell membrane, so that the interior of the flagellum is accessible to the cell's cytoplasm. Each of the outer 9 doublet microtubules extends a pair of dynein arms (an inner and an outer arm) to the adjacent microtubule; these dynein arms are responsible for flagellar beating, as the force produced by the arms causes the microtubule doublets to slide against each other and the flagellum as a whole to bend. These dynein arms produce force through ATP hydrolysis. The flagellar axoneme also contains radial spokes – polypeptide complexes extending from each of the outer 9 microtubule doublets towards the central pair, with the "head" of the spoke facing inwards. The radial spoke is thought to be involved in the regulation of flagellar motion, although its exact function and method of action are not yet understood.

Euglena is a genus of single-celled flagellate eukaryotics. One of the most studied of microscopic organisms Euglenas have both animal and plant features. Their most distinctive characteristics are a long flagellum and a large red eyespot (Euglena means "good eye" in Greek). Euglenas play symbiotic host to green algae and other micro-organisms which produce food for the Euglena while benefiting from its ability to move toward light.