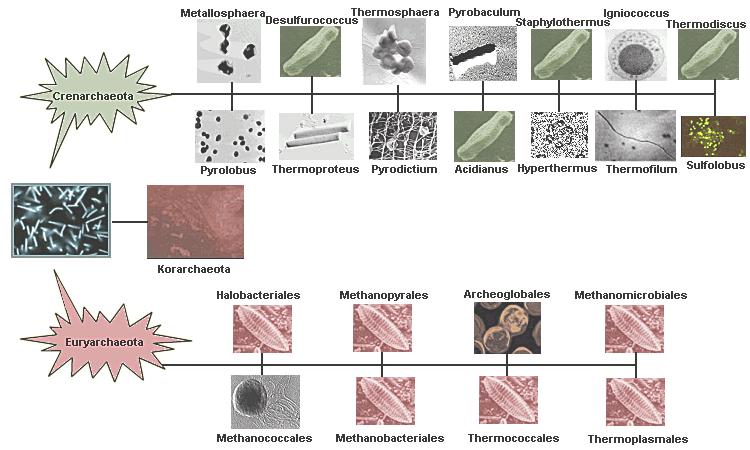 Archaea are primitive prokaryotes which, until recently, were known as archaebacteria and placed in the same kingdom (Monera) as bacteria. Largely through the work of Carl Woese and his colleagues at the University of Illinois, they are now generally recognized as being genetically and structurally distinct, and forming their own domain, Archaea. Unlike bacteria, archaea lack peptidoglycan in their cell walls. They also have unusual (ether-linked) lipids in their cell membranes which are not found in any other group of organisms. The structure and function of the genes in archaea are surprisingly similar to the structure and function of the genes in eukaryotes, while those of bacteria are not. There are major differences, too, in some of the fundamental biochemical processes of metabolism between archaea and bacteria. Archaea are currently classified into three groups: Crenarchaeota, Euryarchaeota, and Korarchaeota.

Crenarchaeota include sulfur-metabolizing hyperthermophiles and acidophiles. These are chemautotrophic anaerobes which thrive at temperatures from 70°C to 113°C (158°F to 235°F) in regions such hot sulfur springs, hydrothermal vents, and volcanoes. Euryarchaeota include a mix of methanogens (all anaerobes), extreme halophiles (mostly aerobes), and a few sulfur-metabolizing thermophiles. Korarchaeota is a newly recognized group. See also extremophiles.

Archaea are thought to be among the earliest terrestrial life-forms to have evolved, survivors from a time when the environment on Earth would have been too hostile to allow anything other than extremophiles to develop (see Earth, early history). At the same time, the features of archaea generally resemble the features of eukaryotes and bacteria more than they do each other, suggesting that archaea may lie close to the root of the terrestrial tree of life (see life, origin). Korarchaeota, in particular, have been singled out as the closest organisms yet found to the universal ancestor. It may be that archaea, and other varieties of extremophiles, are commonly the first to colonize young planets and that as time goes by they retreat to those regions, such as hydrothermal vents and subsurface rocks, where primordial environments remain. If so, this offers new hope of finding such primitive life-forms underground on Mars and possibly even Venus, as well as in any hydrothermal regions on the large moons of the outer planets, including Europa and Callisto.