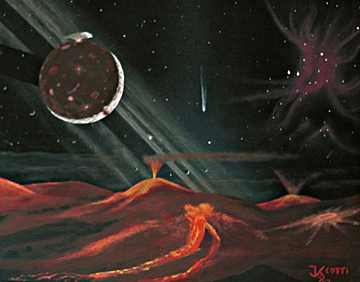 Fig 1. Bombardment of the early Earth. 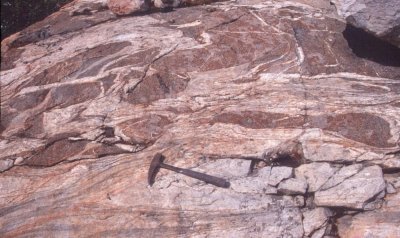 Earth was formed about 4.55 billion years ago through the accretion of small particles within the protoplanetary nebula that surrounded the infant Sun. Its primordial atmosphere probably consisted of a mildly reducing atmosphere of carbon monoxide, carbon dioxide, nitrogen, water vapor, and a small amount of hydrogen, derived from volatile matter that permeated the outer layers of the planet. Heat released by the breakdown of short-lived radioactive elements led to further massive outgassing of these substances. What little free hydrogen there was soon escaped into space, allowing the formation of an ozone layer which subsequently protected the surface against the Sun's ultraviolet radiation. However, conditions for the evolution of life were hardly clement during the first few hundred million years after Earth's formation. In that early period, between about 4.55 and 3.8 billion years ago, Earth is thought to have been struck repeatedly by objects measuring 100 km or more across and traveling at around 30 km/s. Each such impact would have seared the surface at temperatures of up to 3,000 &#176C, stripping away any atmosphere, boiling away any oceans, and rendering life impossible down to a depth of about 1 km below the surface.

Recent discoveries of extremophiles in deep subsurface rocks and in high temperature environments, however, suggest that once life had appeared it may have survived the traumas of bombardment by retreating deep underground.

The Acasta formation (Fig 2) is the oldest known outcrop of rock on Earth. It occurs about 350 km north of Yellowknife in Canada's Northwest Territories and consists of gneiss (a type of coarse-grained metamorphic rock) that dates back just under four billion years – to around the beginning of the period of late heavy bombardment.

origin of the oceans