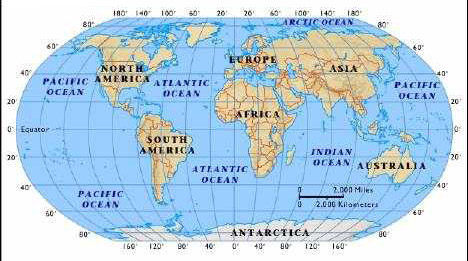 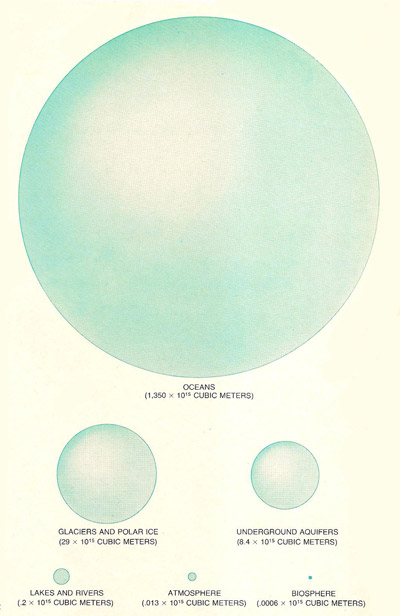 Fig 2. The distribution of water on Earth is indicated in this illustration, in which the amount of water present in various natural reservoirs is represented in terms of comparative spherical volumes. The number under the name of each reservoir denotes the contents of the reservoir in cubic meters. Although the atmosphere contains a mere hundred-thousandth of all the water in the hydrosphere, the influence of this small amount on the climate and on the location of hydrologic resources is far out of proportion to the mass.

Fig 3. How ocean trenches and mid-ocean ridges are formed
Credit: US Geological Survey.

Fig 5. Seventy-three of the 92 natural elements are known to exist in measurable amounts in seawater. The 50 tankers (A) represent 1 million liters (220,000 gal) of seawater (each tanker holds 20,000 liters). The last two tankers (B) contain the elements present in this volume and the proportions of each are indicated. 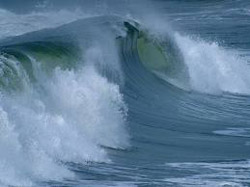 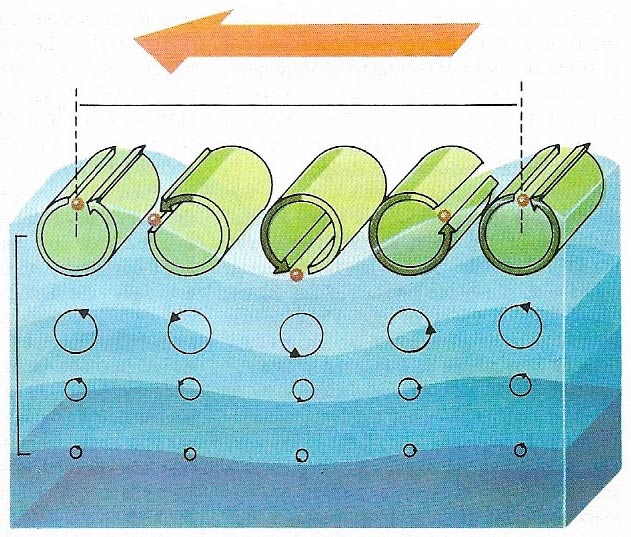 Fig 6. Most waves are generated by the wind. As a wave travels in deep water, however, the water particles do not move up and down but rotate in circular orbits. As depth increases, the rotations of the water particles diminish rapidly. This is why submarines escape the effects of severe storms.

An ocean is a continuous body of salt water that surrounds the continents and fills Earth's great depressions. The ocean's cover about 71% of Earth's surface (more than 80% of the Southern Hemisphere) and comprise about 98% of the water of the planet.

There are five main oceans: the Atlantic, Pacific, Indian, Arctic, and Antarctic (Fig 1). They may be described by distinct region (littoral, benthos, pelagic, and abyssal), or by depth (continental shelf or margin, deep sea plain, and ocean trench). The seafloor has a varied topography. See also mid-ocean ridge.

Seawater contains salt and other mineral deposits; the salt content, between 3.3% and 3.7%, is the result of washout from the land and interchange with the atmosphere over the ages. Light penetrates seawater to a maximum depth of about 300 m (1,000 ft), below which plant life cannot grow.

The oceans are constantly moving in currents, tides, and waves. With the atmosphere, they form an integral part of Earth's hydrological cycle and climate. By acting as a reservoir of solar heat energy, they ameliorate the effects of seasonal and diurnal (day-night) temperature extremes for much of the world. Marine fauna, such as fish and plankton, are a vital part of the world's food chain.

A few substances can be extracted economically from seawater, notably common salt, magnesium, and bromine. Salt has been obtained from the sea since ancient times. The traditional method is to flood coastal pans with seawater. As the water evaporates in the sun, some impurities are precipitated out. The concentrated brine is then passed to another pan where the salt is precipitated. Sea salt is especially important in countries that have no other source of salt, such as Japan.

Magnesium is an important metal in the lightweight alloys that are used to manufacture aircraft, precision instruments, and other products. In the 1930s, Germany produced nearly two-thirds of the world's out so American and British scientists began experiments to extract it from seawater. British efforts proved successful in 1939 with a process that removed the magnesium as a hydroxide after seawater had been mixed with lime.

Bromine, an important element in the photographic and pharmaceutical industries and in the production of high-octane gasoline, is also largely obtained from seawater. However, the prospects for extracting other elements from seawater are influenced by two main factors. First, there must be a shortage of the element on land to justify the high level of investment that would be required and, second, successful exploitation relies on technological developments.

Apart from resources in seawater itself, exploitation of ocean floors can yield other valuable materials, including manganese nodules, petroleum, and natural gas. The continental shelf yields sand, gravel, and limestone, which are taken from beaches and coastal waters. Some beach deposits contain metals in quantities worth extracting. For example, the black sands along the Atlantic coast of the United States from New Jersey to Florida contain ilmenite and rutile, ores from which titanium is obtained, and monazite, a rare earth mineral. Mining materials on the seabed in shallow water has also become important.


Origin and history of the oceans

Some of the water in Earth's oceans came from condensation following the outgassing of water vapor from the surface of the planet, while some was delivered by impacting comets. An important question in recent years has been the relative importance of these two sources.

According to one school of thought, comets may have supplied the bulk of oceanic water during the heavy bombardment phase of the solar system, between about 4.5 and 3.8 billion years ago. If this is true, it increases the chances that organic matter, which is also found in comets, plays an important part in the origin of life generally. However, a study carried out by scientists at the California Institute of Technology, the results of which were published in March 1999,1 suggested that most of Earth's water probably did not have a cometary origin. Using Caltech's Owens Valley Radio Observatory Millimeter Array, cosmochemist Geoff Blake and his team found that comet Hale-Bopp contains substantial amounts of heavy water, which is rich in the hydrogen isotope deuterium. If Hale-Bopp is typical in this respect and if cometary collisions were a major source of terrestrial oceans, it suggests that Earth's ocean water should be similarly rich in deuterium, whereas in fact it is not.

Through volcanic activity the oceans as we see them today have been forming over the last 200 million years. The theory of continental drift (and associated seafloor spreading) has revealed that the ancient supercontinent Pangea was surrounded by a vast ocean, Panthallasia. As Pangaea began to split, a smaller and shallower ocean, the Tethys Sea, formed between the continents. By about 65 million years ago, the Atlantic and Indian oceans appeared. The Pacific became separated from the Atlantic and Indian oceans when the North and South American continents joined. The separation of Greenland from North America, and the widening of the North Atlantic, completed the encirclement of the Arctic Ocean.

An ocean basin is one of two major provinces of the deep ocean floor, lying over 2 km (1.2 mi) in depth. The mid-ocean ridges form the other province. Together they constitute 50% of the Earth's surface. The deep ocean basin is underlain by a basaltic crust, about 7 km (4.3 mi) thick, and is covered in sediment and dotted by low abyssal hills.

Ocean currents are large-scale permanent or semipermanent movements of water at or beneath the surface of the oceans. Currents may be divided into those caused by the winds and those caused by differences in density of seawater. In the former case, friction between the prevailing wind and the water surface causes horizontal motion, and this motion is both modified by and in part transferred to to deeper layers by further friction. Density variations may result from temperature differences, different salinities, etc. The direction of flow of all currents is affected by the Coriolis effect. Best known, perhaps, are the Gulf Stream and Humboldt current. See also tide.

An ocean trench is a long, narrow, linear depression of the sea floor caused by the subduction of one plate under another (Fig 3). Ocean trenches have a V-shaped cross-section and run, typically, roughly parallel to continental coastal mountain ranges or volcanic island arcs. See also mid-ocean ridge.

Ocean waves are undulations of the ocean surface, generally the result of the action of wind on the water surface (Fig 5, 6). At sea, there is no overall translational movement of the water particles: they move up and forward with the crest, down and backward with the trough with the trough, describing a vertical circle. Near the shore, friction with the bottom causes increased wave height, and the wave breaks against the land. Waves thus cause much coastal erosion.