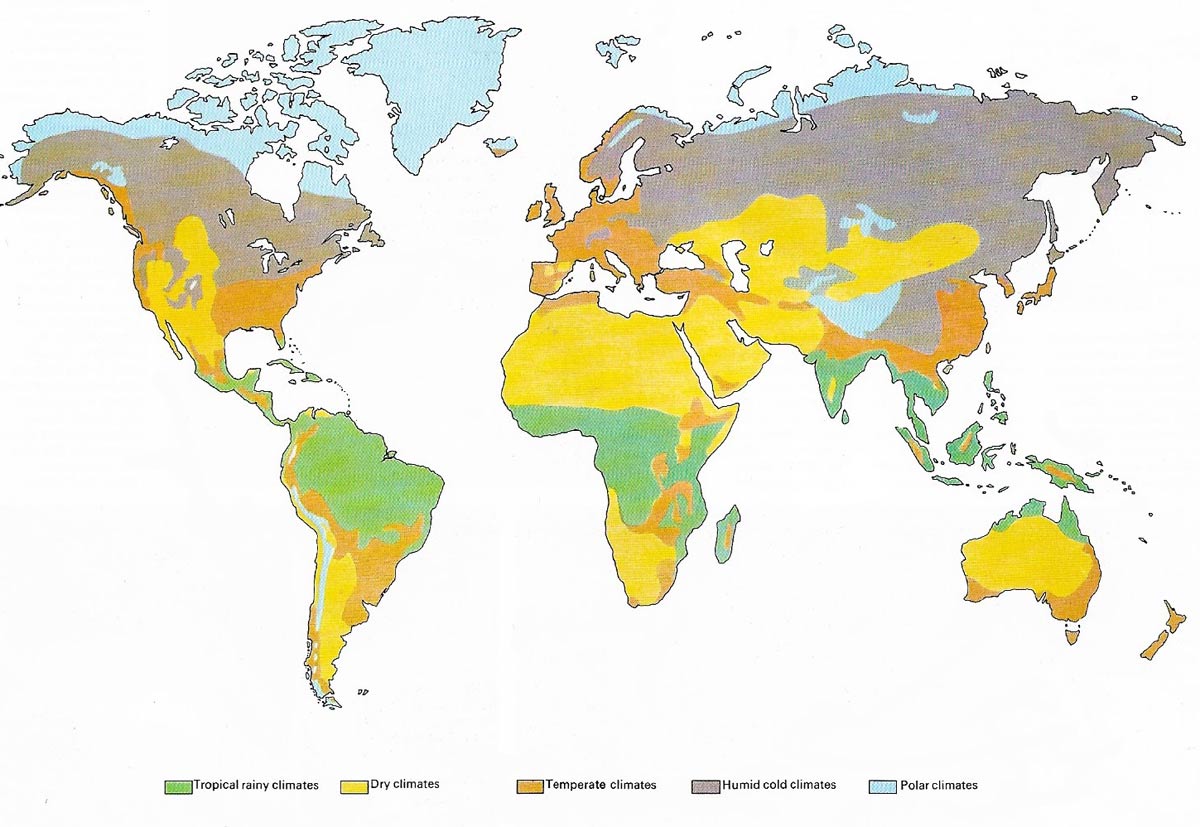 Climate on the global scale presents a bewildering variety and has provided would-be classifiers with a challenge for more than a century. The most generally accepted classifications reflect the close links that exist between vegetation and climate. A system in wide use today is that of W. Köppen (1846–1940), a German biologist who devoted most of his life to climatic problems and modified his own system many times before he was satisfied with it. The Köppen system of classification recognizes five major climatic categories, each quite distinct. These are equatorial and tropical rain climates, dry climates, temperate climates of the (mainly) broadleaf forest zone, humid cold climates and polar climates. Each category is defined in terms of temperature and some in terms of rainfall too. Köppen also devised additional symbols for times of year in which most rain falls and other climatic qualities that affect the growth of vegetation. The map locates the hot, wet tropical rain forests of South America, Africa and the Far East. Farther away from the equator the world's great deserts, dominated by the Sahara, straddle subtropical latitudes and the edges of the tropics, as a result of the stable high pressures there. The deserts are more evident in the Northern than in the Southern Hemisphere, mainly because of the extensive southern oceans. Nearer the poles, a mosaic pattern of mid-latitude climates occurs. This is less complex over the huge continental areas of Siberia and North America, particularly in tundra and boreal regions. The extreme polar and highland climates (dissimilar but with common features) occupy smaller areas. 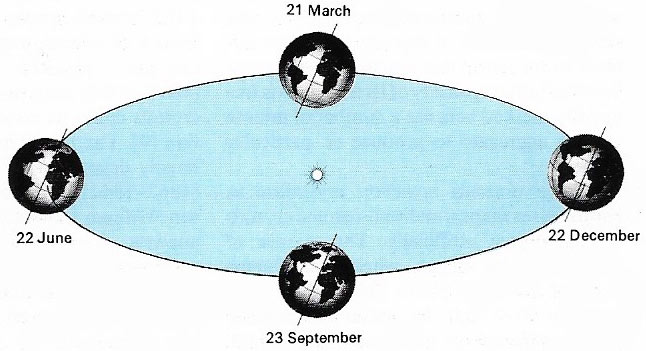 Fig 1. The seasons are primarily controlled by the rotation of the earth round the sun and the inclination of the Earth's axis to the plane of rotation. Inclination of 23.5° means that the Sun is directly over the Tropic of Cancer (23.5°N) on 22 June and over the Tropic of Capricorn (23.5°S) on 22 December. At the equinoxes, 21 March and 23 September, the sun is over the equator. The Sun's apparent movement is accompanied by a similar shift in belts of pressure and wind.

Fig 2. Polar climates, as in Arctic Bay (A), are very cold and dry. Only three months of summer are frost-free (B). There is little precipitation but much surface water due to poor drainage and low evaporation. 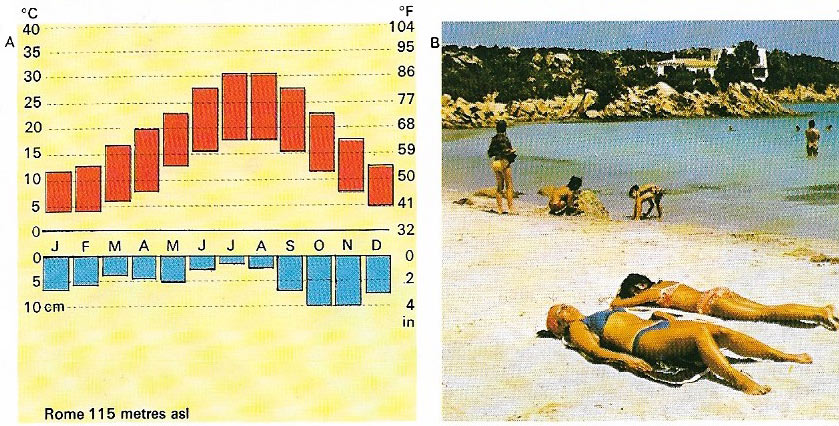 Fig 3. A Mediterranean climate is typified by Rome (A) and its environs (B), with hot, dry summers and warm, moist winters. Similar latitudes, of western USA, South America and Australia, enjoy similar climates. 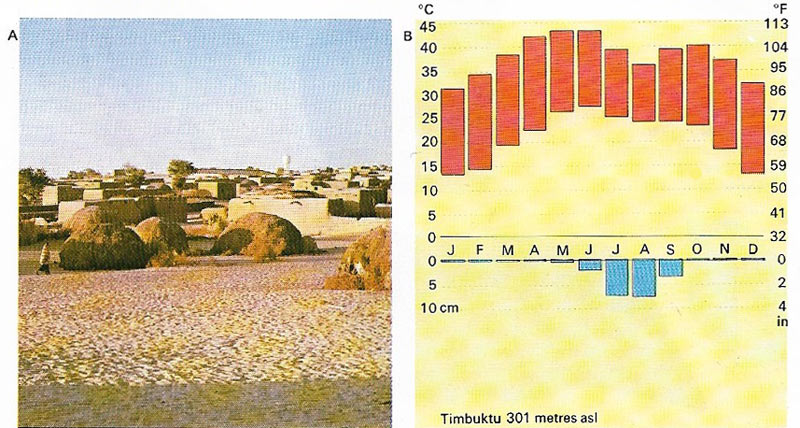 Fig 3. Hot deserts, near Timbuktu (A) for example, show little annual vari4tion of temperature but extreme monthly variation (B). The scarce rainfall occurs as a result of convectional summer storms.

The climate of an area is its characteristic weather considered over a long period. Climate depends first on latitude, which determines whether an area is hot or cold and how strongly marked are its seasons. It depends also on the moving air masses that prevail in the area; these may be purely local in origin or they may have moved into the area from several hundred kilometers away, bringing cooler or warmer, wetter or drier conditions with them. Climate is also influenced by the relative distribution of land and sea, high ground and low, and the presence nearby of forests, lakes, valleys, glaciers and many other physical factors.

On a world scale, macroclimates is defined primarily in terms of temperature and rainfall and the world can be divided into large climatic zones on this basis. On a smaller scale, humidity, wind strength, aspect in relation to the sun and other local features determine local climate. On an even smaller scale, microclimate refers to the conditions in a particular woodland or under a particular stone.

Climates are defined on different scales, ranging from macroclimates which cover the broad climatic zones of the globe, down to microclimates which refer to the conditions in a small area such as a wood or a field.

One of the most commonly used systems for classifying climates is that of Vladimir Köppen, published in 1884 (see top illustration). In it there are five categories (A, B, C, D, E), broadly defined as follows:

These categories correspond to a great extent to zoning by latitude; this is because the closer to the equator an area is, the more direct the sunlight it receives and the less the amount of atmosphere through which that sunlight must pass. Other factors are the rotation of the Earth on its axis (diurnal differences) and the revolution of Earth about the Sun (seasonal differences).

The range of climates can also be broadly grouped under three headings, according to latitude. Tropical climates are hot and dominated by equatorial air masses throughout the year. Temperate climates of the mid-latitude zone are variable, dominated alternately by subtropical and sub-polar air masses, and usually seasonal. Polar climates of high latitudes are uniformly cold, under the continuous control of sub-polar and polar air masses and strongly seasonal.

Nearly the poles are climatic regions controlled by polar masses (Fig 2). Despite brief, sunny summers they tend to be cold and dry throughout the year. The broad boreal zone is forested, the tundra zone supports shrubs, rough grassland and mosses. The true polar climate, which covers the northern fringes of Canada, Europe and Asia and the whole of the Antarctic continent, is generally too cold and dry to support any but the most meagre and hardy vegetation. The coldest regions of the Northern Hemisphere lie in the heartlands of northern Canada and northeastern Siberia, where winter temperatures fall well below -30°C (-22°F). On the high polar plateau of Antarctica summer temperatures are about -30°C (-22°F), while winter temperatures average -70°C (-94°F) or lower.

Geological evidence suggests that the modern situation in which different parts of the globe have certain well-defined climatic patterns is unusual. In past ages climates tended to be fairly even over most of the earth's surface. For example, the Permian period 280 million years ago was characterized by extensive desert areas over most of the continents and Jurassic sediments 195 million years old show evidence of warm, wet conditions in most places. The present pattern may be due, in part, to the fact that the earth is still recovering from the last Ice Age.

Because of constant daily sunshine, equatorial and tropical regions are warm throughout the year and the moving air masses that affect them are also warm. The wettest regions lie in a belt of shallow depressions and convection formed where the trade winds meet. This belt shifts north and south seasonally on either side of the equator, but temperatures vary only slightly and rainfall is fairly steady throughout the year. Monsoon climates of India, Southeast Asia and China occur where seasonal winds blow from almost opposite directions; warm, moist winds alternate with warm, dry ones, giving cloudy, wet "summers" and drier "winters". Dry tropical climates occur in broad zones on either side of the equator between latitudes 15° and 30°. These are anticyclonic areas of warm, dry air, where cloudless skies bring strong sunshine and little rain except in rare torrential thunderstorms.


Temperate climates and their features

The middle latitudes of both hemispheres are battlegrounds where warm subtropical and cool sub-polar air masses jostle for position. The day-to-day battle-lines are the warm and cold fronts of the weather charts, which tend to occur along broad frontal zones. On the equatorial side of these zones warm air is present for most of the time. The zones shift north and south with the seasons so that an area such as the south of France may bask reliably in subtropical air throughout the summer but suffer occasional droughts of cold sub-polar air in winter. On western flanks of the continents in the warmer zone the air tends to be dry, bringing hot, dry summers and mild, damper winters – the Mediterranean climate of California, southwestern Australia and the eastern Mediterranean itself. Eastern flanks of the continents draw moist, unstable air from over the sea; they tend to be warm all year, with frequent thunderstorms in summer.

In higher latitudes, farther from tropical influences, cool sub-polar air masses prevail. A procession of cyclones or depressions, swinging eastwards round the earth, brings moist maritime air to the western flanks of North America and Europe. Britain and western Canada stand in prevailing southwesterlies, giving mild, cloudy and damp conditions in winter and summer alike. Alternating air masses from the eastern continents bring cold, clear winter and hot, dry summer weather, and air from the north is usually cold and crisp. Central and eastern regions of the continents tend to be drier, with colder winters and hotter summers.

A continental climate is a type of climate found in the interior of large continents, that is, hot summers with convectional rainfall and very cold, dry winters, with only light falls of snow. Summer temperatures are about 20°C (68°F), and winter temperatures are -10°C to -20°C (14°F to -4°F) in the coldest month. Total annual precipitation is about 500 mm (20 in). The natural vegetation consists of grassland. Areas of continental climate are found in Poland and Hungary, and on the steppes of Russia, and the prairies of North America. In the Southern Hemisphere there are no areas of real continental climate because the land masses are relatively narrow, so that oceanic influences are present throughout.

A maritime climate is a climate that is strongly influenced by proximity to the sea. Britain has a maritime climate, which means that it has mild climate for its latitude. Oceans warm up more slowly than land, because the heat of the Sun is spread out through a great depth of water and because ocean currents allow the heat to move vertically as well as horizontally. However, oceans also retain heat for much longer than land. For this reason, climatic conditions near an ocean tend to be much warmer in winter and slightly cooler in summer than in inland areas at the same latitudes. In addition to the effects on temperature, the sea also influences precipitation, which is greater than in inland locations.

The maritime climate in Britain is most marked in the Isles of Scilly, Cornwall, where the average temperature in winter is about 7°C (45°F) – about the same as the Mediterranean coat of France. In the summer, the temperature averages 16°C (61°F), and the total annual rainfall is about 800 mm (32 in). Moving eastwards into Europe, along similar latitudes, the climate gradually changes to a continental climate, such as that in Germany, where the corresponding figures would be about 0°C (32°F), 19°C (66°F), and 550 mm (22 in).

A Mediterranean climate (Fig 3) is a type of climate associated with the countries surrounding the Mediterranean Sea, but also found in southern California, central Chile, and parts of Australia. Summers are hot and sunny, averaging 25°C (77°F) or more; winters are mild, ranging from 5°C to 15°C (41°–57°F). Summers are very dry but winters can be quite wet, with up to 600 mm (24 in) of rainfall, some of which come as thunderstorms at the end of the summer.

Climatology is the study of Earth's climates. Physical climatology investigates the relationships between temperature, pressure, winds, precipitation, and other weather phenomena. Regional climatology considers latitude and other geographical factors, e.g., the influence of large land masses in the climatic study of a particular place or region.

Climate modeling is the use of a computer to simulate Earth's climate. Physical data, such as temperature, pressure, wind direction, and so on are manipulated mathematically by a powerful computer to give a model of Earth's whole climatic system. Researchers can vary various parameters to see what changes occur. In this way they can study the effects of the greenhouse effect and global warming, or what would happen if there was a significant change in the amount of radiation from the Sun. Such modeling can be limited by scientists' understanding of the key factors controlling climates.