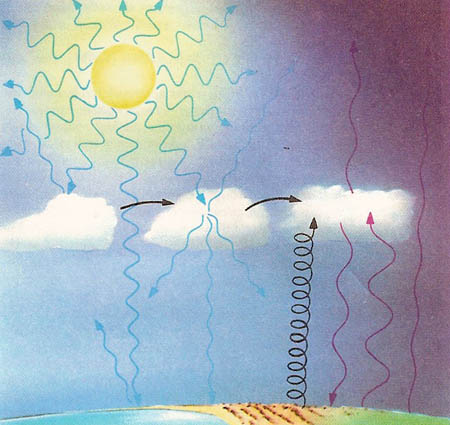 
How the greenhouse effect works

The greenhouse effect can be explained with the aid of Wein's displacement law. This states that the wavelength at which a blackbody radiates most intensely varies inversely with its absolute temperature. Thus the radiation originating in the hot sun is of much shorter wavelength than that radiated from the cool Earth or its atmosphere. Since the atmosphere, particularly when laden with water vapor, is far more opaque to the long-wavelength radiation characteristic of Earth than it is to incoming solar radiation, it tends to absorb the former radiation and reradiates it, largely back toward the surface, ensuring that Earth's surface is maintained at a somewhat higher temperature than would be the case were all the energy radiated from the surface lost directly into space. Actually, less than half the short-wave solar radiation arriving at the top of the atmosphere is absorbed at Earth's surface. Much is scattered into space by minute particles in the atmosphere or absorbed by atmospheric dust, ozone, carbon dioxide, and water vapor. This last, absorbed energy becomes involved in the long-wavelength radiation processes. Some energy is transferred from the surface to the atmosphere by convection and as latent heat of vaporization of water.