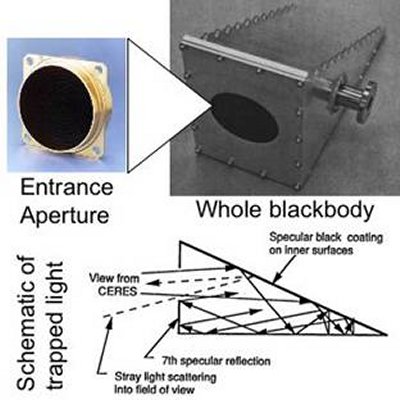 A blackbody is a theoretical object that is both a perfect absorber and a perfect radiator of electromagnetic radiation.

A blackbody absorbs all the radiation that falls on it, converts it into internal energy (heat), and then re-radiates this energy into the surroundings. The re-radiated thermal energy, known as blackbody radiation, has a continuous spectrum governed solely by the body's temperature.

For any given temperature, there is a specific wavelength at which radiation emission is greatest (see diagram labeled "Variation in blackbody curves with temperature").

where L is the luminosity of the body, R is its radius, and σ (= 5.67 × 10-8 W/m2/K4) is the Stefan-Boltzmann constant. (A simplified form appears in the box on blackbody radiation laws in the bottom illustration.)

Substituting solar values for L and R gives a value for the effective temperature of the Sun of about 5,780 K.