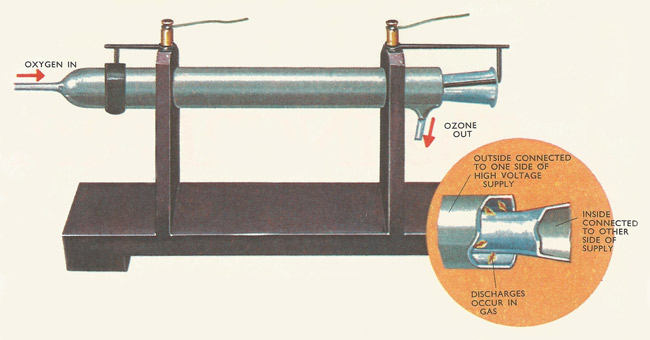 Fig 1. Producing ozone in the laboratory. Oxygen is passed into the ozone tube. This consists of two glass tubes, the outer surface of the outside tube and the inner surface of the inside, each coated with tin foil. High voltage sparks are passed between the glass surface through the oxygen, to form ozone.

Ozone (O3) is the triatomic form of oxygen. Ozone is a poisonous, pungent, faintly blue gas that is produced by the action of electrical discharges (such as lighting) on oxygen molecules. It forms a stratospheric layer in Earth's atmosphere (see ozone layer) and is responsible for filtering out ultraviolet radiation from the Sun which would otherwise make advanced life on the planet impossible.

Among the strategies which will be used in the future to search for signs of life on extraterrestrial Earth-class planets will be to look for the spectral absorption lines that are characteristic of ozone.

The ozone molecule is a high-energy form of oxygen. Oxygen molecules have to be energized (usually electrically) before they come together to form ozone:

When the ozone molecule is formed it is active and unstable – it easily reverts to ordinary oxygen. It is a very powerful oxidizing agent. For example, lead sulfide is oxidized to lead sulfate by ozone:

and ferrous sulfate (in the presence of dilute sulfuric acid) to ferric sulfate:

In these reactions, the ozone molecules lose a solitary oxygen atom, but in other reactions the whole molecule takes part. For example, sulfur dioxide is oxidized to sulfur trioxide, using all three oxygen atoms in the process:

Although ozone is present in very small proportions in the air its powerful oxidizing action can, over a period of time, cause cracking in rubber tires – to overcome this, anti-oxidants are mixed with the rubber.

Important classes of organic compounds contain double or triple unsaturated chemical bonds, and the chemist needs to know where these are situated in the molecule. Ozone is used in analysis because it is taken in at the unsaturated link to form explosively unstable ozonides. The compound under investigation is dissolved in an organic solvent and ozone is bubbled through to form the ozonide. In butene, for example, the ozonide link can be formed either between the second and third carbon atoms at the double bond.

or the third and fourth carbon atoms:

If the resulting compound is heated gently in water it breaks at the ozonide link. In the first reaction, acetaldehyde (CH3CHO) and acetic acid (CH3COOH) are formed, each with two carbon atoms. In the second reaction two compounds, one with three carbon atoms and one with a single carbon atom, are formed. By identifying the resulting fractions, the position of the double bond in the original compound is found.

To prepare ozone (Fig 2), ordinary oxygen is passed through a tube where it is subjected to electrical discharges (see Fig 1). The electrodes are covered with insulating materials (glass or mica) so that the discharge currents are kept low, and high voltage pulses are applied between the electrodes. This method has to be used so that the oxygen acquires the energy it needs to form the ozone, but at the same time the ozone does not become so hot that the molecules break up into ordinary oxygen.

The ozone layer is a layer in the lower part of Earth's stratosphere, about 25 km above sea level, where the greatest concentration of ozone appears (Fig 2 and 3). This is the layer responsible for the absorption of most solar ultraviolet radiation.