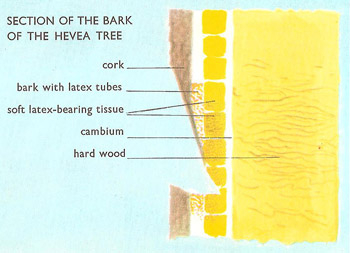 Fig 1. The Hevea tree comes into production when it is seven years old and may continue to produce latex until its about 30 yr old. Each year about 150 cuts are made on the trunk, removing an area of bark some 12 to 15 in from top to bottom. The bark will grow over again in seven to ten years. The white latex, from which the rubber is made, flows along a system of capillary canals in the soft inner part of the bark, next to the cambium; outside this is a harder layer with a few latex canals, and this is protected externally by a layer of cork. 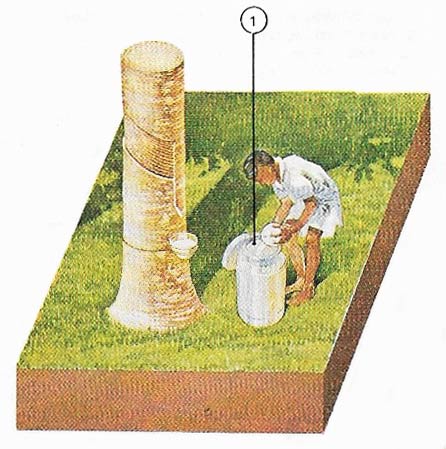 Fig 2. Plantation rubber begins life as a watery latex (1) tapped from a spiral cut on a rubber tree. 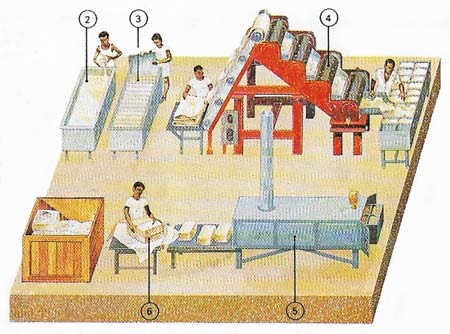 Fig 3. Foreign matter is filtered out and the latex coagulated into solid rubber with an acid (2). In coagulation tanks the rubber is separated into slabs by partitions (3). The slabs are dried, first by rollers (4) then by passing them through a drying tunnel (5). The raw rubber is then packed for export (6). Malaysia is the world's largest producer.

Fig 4. At the factory, latex from a rubber tree can be acid-coagulated and sequence-dried (1–4) or concentrated by centrifuge (5). Rubber is melted (8) or vulcanized (6) with sulfur after which it can be shaped in molds (7). 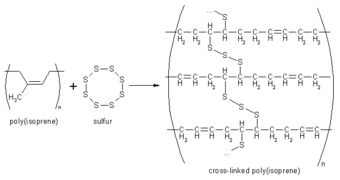 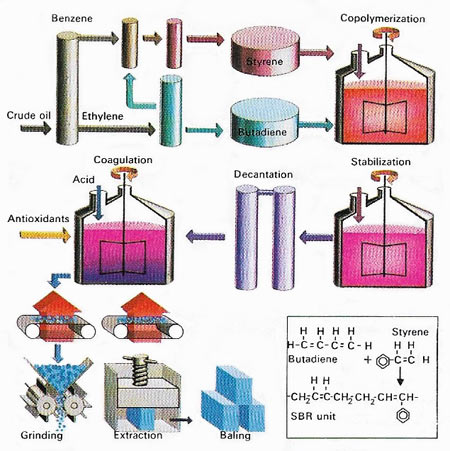 Fig 6. Styrene butadiene rubber (SBR) is the major synthetic rubber used widely for tires, conveyor belts, and other commercial and industrial products. It is a copolymer made by polymerising two chemicals together. These are styrene and butadiene, which originate in crude oil. A catalyst is required, as in most polymerisation reactions, to speed up the reaction. In later parts of the process, stabilisers and antioxidants are added to prevent the rubber breaking down and to protect it from oxidisation by air. It is then dried and baled.

Rubber is an elastic substance, i.e., one that returns to its original size after it has been stretched or compressed. Natural rubber is obtained from many plants, and commercially from Hevea brasiliensis, a tree native to South America and cultivated in Southeast Asia and West Africa (Fig 1). A slanting cut is made in the bark, and the milky fluid latex, occurring in the inner bark, is tapped off (Fig 2). The latex – an aqueous colloid of rubber and other particles – is coagulated with dilute acid, and the rubber creped or sheeted and smoked.

Natural rubber is a chain polymer of isoprene, known as caoutchouc when pure; its elasticity is due to the chains being randomly coiled, but tending to straighten out when the rubber is stretched. Known to have been used by the Aztecs since the 6th century AD, and first known in Europe in the 6th century AD, it was a mere curiosity until the pioneer work of Thomas Hancock (1786–1865) and Charles Macintosh (1766–1843).

1493 – On his second voyage to America Christopher Columbus saw some natives in Haiti playing a game with a curious ball which had the astonishing property of bouncing when it struck the ground.

1521 – During the Spanish occupation of Mexico, Spanish explorers found the native people using the same elastic substance for many purposes, and a variety of stories about it reached Europe. It was reported, for instance, that they stuck brightly colored feathers onto their bodies as ornaments, using a kind of whitish milky substance obtained from a plant (rubber latex). Another use to which they put the latex was to mold it round their feet so that, when it dried and hardened, it formed a primitive kind of footwear.

1735 – Charles de la Conamine, a Frenchman, explored the region of the Amazon, searching for the rubber plant which no European had ever seen. The native name for it was 'hévé' or 'cao ochu' which means 'tree of tears'. The alternative name for rubber, caoutchouc, is derived from this. After an adventurous journey in explored country, Condamine found the Hevea tree; he sent a detailed description of it to his government together with some objects he had made from the latex obtained by cutting the bark. The mysterious substance was carefully studied and analyzed.

1763 – Some French chemists succeeded in dissolving the rubber in oil of turpentine and in ether.

1793 – An Englishman called Peal obtained the patent for water-proofing fabric with a solution of rubber in turpentine. Prior to this practically the only use for it had been as an eraser for pencil marks; hence the English name for it, 'india-rubber' – rubber from the Indies.

1823 – Charles Macintosh, a Scottish chemist,improved the method of water-proofing fabric and founded the first factory for rubber articles. Among its products were water-proof coats, which came to be called 'macintoshes'. These early European rubber goods, however, had serious defects. They perished very quickly and became soft in hot weather. In cold weather they became hard and lost their elasticity.

1839 – A chance discovery by an American, Charles Goodyear, who produced a revolution in the rubber industry because of his discovery of vulcanization.

The latex is obtained from the tree by 'tapping" – it seeps out through spiral cuts made in the bark (Fig 2). The liquid latex is coagulated (made solid), dried, and expored as sheets of raw rubber (Fig 3 and 4). This is a weak, sticky, and not very elastic material. Its strength and elasticity are improved by the addition of sulfur in a process known as vulcanization (see below).

The strength and wear-resistance of rubber are also improved by the addition of fillers, which are powdery or fibrous substances mixed into the rubber and include carbon black and cotton flock.

Natural rubber, vulcanized and fillwd, is a useful elastic material and is widely employed although it is rather expensive to produce. Since the mid-1960s, its production has been greatly outstripped by that of synthetic rubbers, which have other advantages.

Vulcanization is a process for enhancing the durability of rubber by heating it with sulfur or sulfur compounds, usually in the presence of accelerators which speed the reaction (Fig 5). Vulcanization involves the creation of sulfur bridges between the long-chain rubber polymer molecules so that these polymers can no longer slide over one another so easily. Rubber containing a great of sulfur has many cross-links and so is rigid; this hard material is called ebonite.

Synthetic rubbers have been produced since World War I, and the industry has developed greatly during and since World War II. They are long chain polymers known as elastomers; the main types are: copolymers of butadiene/styrene (see Figure 6), butadiene/nitriles and ethene/propylene; polymers of chloroprene (neoprene rubber), butadiene, isobutylese, and silicones; polyurethanes, polysulfide rubbers and chlorosulfonated polyethenes. Some latex (natural or synthetic) is used as an adhesive and for making rubber coatings, rubber thread, and foam rubber. Most, however, is coagulated, and the rubber is treated by vulcanization and the addition of reinforcing and inert fillers and antioxidants, before being used in tires, shoes, rainwear, belts, hoses, insulation, and many other applications.

Foam rubber is a material used widely for cushioning and sometimes for thermal insulation. It is about 10% rubber, 90% air. Usually latex is whipped into a froth, then gelled and vulcanized in a mold. For insulation, hydrogen peroxide is introduced into latex; this liberates oxygen during vulcanization to form unlinked cells.