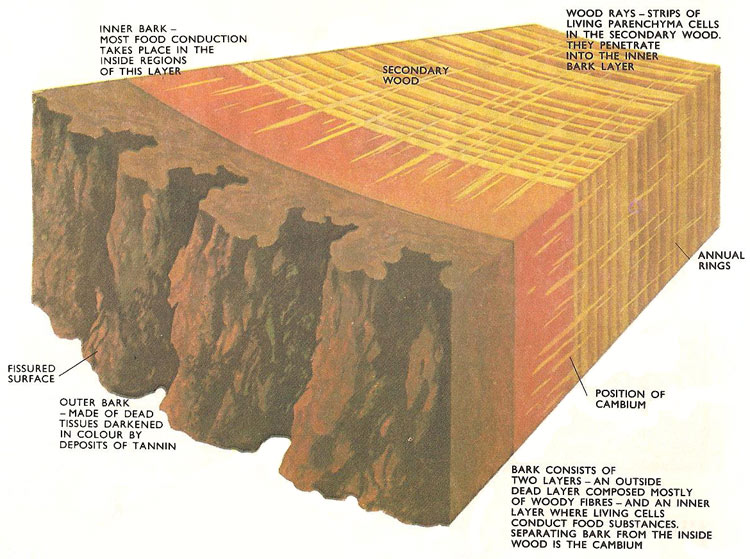 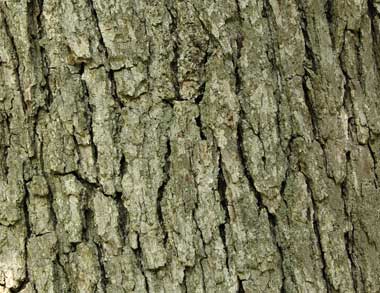 Bark of a white oak. 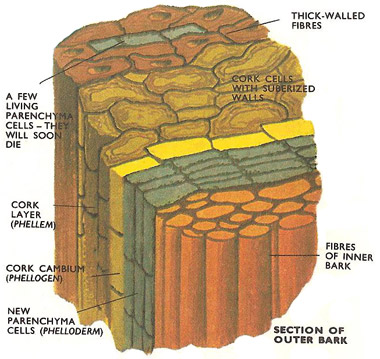 Outer bark contains cork layers or periderms. Each periderm consists of a few layers of cork cells (the phellum) and a layer of dividing cells (cork cambium). The division of the cork cambium cells gives rise to the cork cells on the outside and often to new parenchyma cells on the inside (phelloderm). 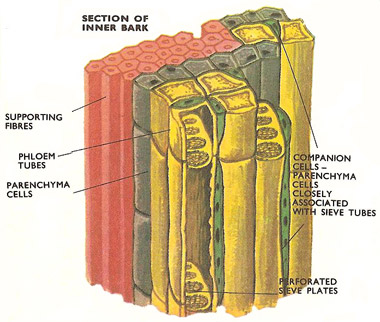 In the inner bark the most important cells are sieve tubes. They conduct food substances in solution. Unspecialized parenchyma cells and woody fibers are also present. 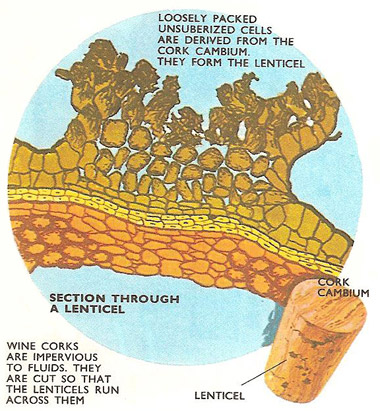 Cork is impenetrable to fluid but inner living tissues must still receive air. Patches of loosely packed cells (lenticels) are formed in cork layers and allow gas to pass through. The loosely packed tissue has considerable bulk and the lenticels may break the plant surface. Lenticels are especially obvious on smooth bark surfaces.

Bark is the general term for the outer protective covering of the stems and branches of woody plants. It consists of several layers, including the secondary phloem, cork cambium, and cork. The last of these, which is waxy and waterproof, is the thickest and hardens into the tough, fissured outer coating.

The bark is impervious to water and protects the stem from excessive evaporation; it also protects the more delicate tissues within. Lenticels (pores) in the bark allow gas exchange between the stem and the atmosphere. Extracts of bark may have medicinal uses, e.g., quinine from chinchona bark.

In some species, such as oak and elm, the bark appears rough and fissured. In others, such as beech, it is smooth and shiny, while in yet others it is scaly (larch and sycamore). So distinctive is the bark of different plants, that in winter, when leaves have fallen, it remains one of the most useful features for identifying trees.

But the bark seen on the outside of a tree is not the whole of the structure. In fact it is the least important section, consisting almost entirely of dead tissues. There is an inner region of bark which is much paler colored and contains cells which are still alive. The cells of this inner go to make the phloem – a tissue which is very important indeed for conducting the fluid organic foods throughout the plant. Remove this layer from a tree and the plant will die.

The characteristic cells of the phloem are the sieve tubes. They are elongated cells arranged end to end so that continuous pipes are formed passing up and down the plant's stem. The walls (the sieve plate) between successive cells are perforated so allowing the solutions of sugars, proteins and salts to flow through.

In between the sieve tubes are simple unspecialized living cells (parenchyma) and also tough woody fibers which give support. Most of the food-conduction is carried out by cells in the innermost portion of the inside layer. As the phloem tissues are pushed further outwards by further growth, they become crushed and the living cells are destroyed. The dead tissues eventually go to make up the outer bark.

At the junction of the innermost surface of the bark and the wood inside, there is a thin layer of dividing cells (the cambium). Each year the cambium cells grow and divide. Of the two cells formed, one continues the multiplication while the other becomes adapted to another function. New cells on the inside of cambium increase he girth of the tree trunk – they form more wood. On the outside of the cambial layer, the new cells form more phloem.

The new outer bark tissue becomes completely cut off from the inner bark by special thin layers of cork (periderms). Periderms form from the parenchyma cells which though also subjected to crushing, remain alive considerably longer than the sieve tubes.

The cells which make up cork are tightly packed together. The cell walls are also reinforced (suberized) with fatty substances. Cork is consequently impermeable and forms watertight protective coats about the outside of the bark.

The pattern of the cork layers varies with species of tree. Sometimes they are few and very extensive. Other times they are numerous and separate only a few square inches of outer bark, e.g. the plane tree. In comparison with the thickness of the outer bark, cork layers are usually insignificant. One exception, however, is the cork oak. The cork here may be several inches across while outer bark is very thin indeed. It is from the cork oak that cork for commercial use is taken.

The addition of new (secondary) wood to the stem of the tree together with the formation of new inner bark slowly increases the girth of a tree trunk. The new inner bark tissues are, of course, not subjected to strain. At the time of formation they completely cover the surface area of the tree at its particular stage of development.

Old inner bark, is, however, put under strain. Its tissues are called upon to spread over a greater circumference than they originally covered. The problem is partially solved by a stretching of the cells. But this is not enough. New expansion tissue forms by division of the parenchyma cells.

No such expansion of tissues can go on in the outer bark. All the cells are dead. Under the strain the outer bark tissues split apart giving he gnarled fissured surface familiar in so many trees.

Yet beech for instance is quite smooth. Why should this be? The answer is that the outer bark of beeches is very thin, as the growth rate of bark is very slow. The old outer surface of bark breaks down into powder and disappears quite unnoticed.

In comparison, the bark of the oak grows at least four times the rate of beech. The production of phloem by cambium layer takes place at a much faster rate. Numerous cork layers form, each cutting off sections of outer bark. The amount of dead tissue is considerable. Some flaking off at the surface of outermost bark does occur, but the rate is not fast enough to remove all the accumulated dead tissues. The thick outer bark is particularly subjected to strain and so fissuring occurs and a rough surface produced.

Cork from the cork oak of Mediterranean regions is a very important bark product. Usually cork layers are very thin in comparison with the rest of the bark. But in the cork oak, they grow to considerable thicknesses. The cork layers are stripped every 9 years or so and may be several inches thick.

Tannins, another bark product, are used in the process of tanning leather. They are by-products of plant metabolism and may be deposited in a variety of places – not only the bark. For commercial extraction the bark of oak, hemlock, birch, and willow are particularly important.

From the bark of the South American chinchona comes the drug quinine, valuable in the prevention and cure of malaria. The spice cinnamon is also a bark product. It comes from the cinnamon tree of South-East Asia.