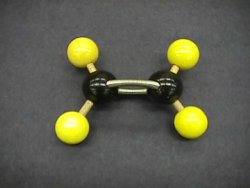 Ball-and-stick model of an ethene molecule. 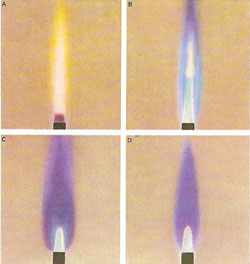 Unmixed ethene burns with a luminous diffusion flame (A), reacting with oxygen drawn in from around the flame. If mixed with a little air, the ethene gives a flame with three distinct layers – an inner core of unburnt gas, a blue-green layer of reacting premixed gas, and an outer cone where partially oxidized products of the premixed layer are burned by a diffusion flame (B). Addition of nitric oxide to the mixture cuts down the amount of oxygen available for immediate combustion and the resultant flame (C) shows a complex series of reactions, as in B. But if more air is added to the gas mixture, the diffusion layer disappears (D).

Ethene (C2H4), also known as ethylene, is the first member of the alkene family of hydrocarbons. Ethene is a colorless, flammable gas, with a slightly sweet smell. It burns in air with a luminous flame and forms an explosive mixture with pure oxygen.

Ethene is made industrially by cracking hydrocarbons (notably ethane and propane) from petroleum and is an important raw material for making other organic chemicals, including ethanal, ethanol, ethyl chloride, diethyl ether, and ethane-1,2-diol. It is also obtained from ethanol by vapor-phase dehydration using an activated alumina catalyst at 350 °C. It may be prepared by dropping ethanol on to syrupy phosphoric acid heated to 220 °C.

Ethene combines directly with the halogens, e.g., with chlorine to form 1,2-dichloroethane (commonly known as ethylene dichloride). With hydrogen it forms ethane. It is readily absorbed by sulfuric acid to give ethyl hydrogen sulfate; if the reaction is carried out under pressure, diethyl sulfate is largely formed.

Ethene reacts with hydrogen bromide and hydrogen iodide at 100 °C to give ethyl bromide and iodide; hydrogen chloride does not react under these conditions. With ammonia under the pressure the ethylamines are formed. It reacts with water at 450 °C, or at lower temperatures in the presence of catalysts, to give ethanol.

It can be polymerized to make polyethene. It is oxidized by air over a silver catalyst to ethylene oxide, a reactive gas used as a fumigant and to make plastics and emulsifiers, and hydrated to ethylene glycol.

Ethene occurs naturally in plants, in which it serves as a growth substance. It is well known for its ability to stimulate the ripening of fruits.

Chloroethene (CH2CHCl), also known as vinyl chloride, is a gas with an ether-like odor. It is manufactured by the chlorination of ethene (ethylene). It polymerizes to form polychloroethene, or polyvinyl chloride (PVC), and is widely used in this form for making electric wire insulation and vinyl records.

Ethylene glycol (HOCH2CH2OH) is a colorless, syrupy liquid, an alcohol, made from ethene. Also known as ethane-1,2-diol, it is used to make polyester polymers, and mixed with water, antifreeze and de-icer. Relative molecular mass 62.1, melting point -12°C, boiling point 198°C.