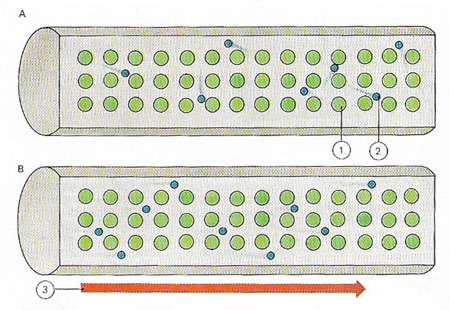 A metal is a conductor of electricity because its atoms (1) easily give up their outer electrons (2), which move freely within the crystal lattice of the metal (A). An electric current flows only if the free electrons have a net motion in one direction (B). A voltage (3) from a battery, say, cab cause such a flow.

An electrical conductor is a medium through which an electric current will flow. Metals are generally very good electrical conductors. The best of all is silver but, for reasons of economy, copper is most often used. Most nonmetals are poor conductors; however, there are exceptions such as plasma. Non-conducting materials are known as electrical insulators.

The electrons in conductors lie in a so-called conduction band that, in an energy diagram, sits on top of the valence band. Electrons in the conduction band are able to move through the medium when a potential difference is applied between two points.

Under normal conditions, all materials offer some resistance to flowing charges, which generates heat. In most cases, electrical resistance rises with increasing temperature.

A material can be an electrical conductor without being a thermal conductor, although most metals are both.

Electrical conductance (G) is the reciprocal of electrical resistance (i.e., 1/R). The SI unit of conductance is the siemens, formerly (in MKS units) called the mho or reciprocal ohm. See also conductivity.

Electrical conductance (symbolized by G) is a useful concept especially when dealing with parallel DC (direct current) circuits. For a similar reason, the reciprocal of the impedance, defined as the admittance, is useful in handling parallel AC (alternating current) circuits. In the case of parallel AC circuits, G reduces to 1/R when purely resistive elements are present. In the general case when there are both resistive and reactive elements, the expression for G is R/(R2 + X2), where X is the reactance.

An electrical insulator is a material that lacks movable electric charges, and therefore lacks a low-resistance path for the flow of electric current. In electrical insulators, or nonconductors, there is a wide separation between completely filled and completely empty electronic energy levels. Even the outermost electrons are so tightly bound that there is essentially zero electron flow through them when ordinary voltages are applied.

Most non-metallic solids are electrical insulators and some materials, such as mica, glass, and quartz are particularly good insulators as characterized by their high resistivities. Most pure solid ionic substances are good insulators, although impurities or imperfections may introduce semiconductivity.

The electrical resistance of insulators usually falls with temperature (paper and asbestos being exceptions) and if chemical impurities are present. The mechanical properties desired vary with the application: cables require flexible coatings, such as polyvinyl chloride, while glass or porcelain are used for rigid mountings, such as the insulators used to support power cables. In general, good thermal insulators are also good electrical ones.