A direct current connected across a resistance rises immediately when the switch is closed. But the current through an inductance rises slowly. Whenever the current in a coil of wire changes, a current is generated in the opposite direction, if it has a complete circuit to flow around. 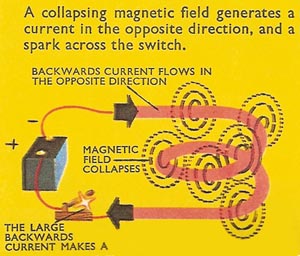 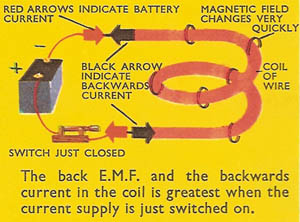 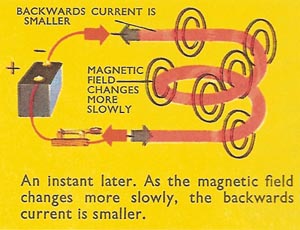 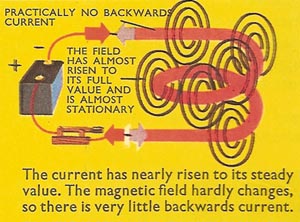 When a current flows through a wire it sets up a magnetic field around the wire. As the current rises or falls, the magnetic field rises or collapses, i.e., it is a moving field. When the wire is coiled into a series of loops the magnetic field around one loop cuts some of the other loops. Whenever moving magnetic fields cut wires, they generate a difference in electric pressure (i.e., an electromotive force or e.m.f.) which pushes a current through the wires, provided the current has a complete circuit to flow around. This is one of the two fundamental principles of electromagnetism – the generator principle. In the electric generator a moving coil rotates through a steady magnetic field and makes a current flow in the wire. A steady field on a moving coil has the same effect as a moving field on a steady coil – the generation of a current.

So as soon as a current starts to flow round the coil, it makes a growing magnetic field, which generates another separate current. The generated current could flow in either of two directions – in the same direction as the current from the battery or in the opposite direction. If it flowed in the same direction, it would increase the field around the coil, which would generate a bigger current in the adjacent coils, and the process would repeat itself, the current rapidly increasing without limit.

The more turns of wire there are in the coil the more turns each turn can affect, or the greater the coil's inductance. Its inductive reactance – the resistance-to-change it offers – is greater.