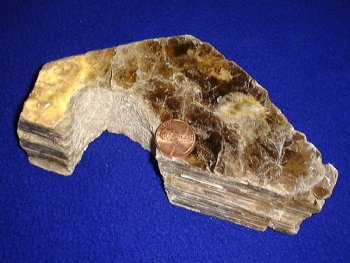 Mica is any of a group of common silicate minerals composed of sheets of linked silicate (SiO4) tetrahedra, with aluminum replacing silicon to some extent, and containing cations (positive ions) and hydroxyl groups between the layers. The three main types are biotite, muscovite, and lepidolite; others include chlorite and glauconite.

Micas occur widespread in many igneous, metamorphic, and sedimentary rocks, and weather to clay minerals. They show perfect basal cleavage, producing thin, flexible flakes which are used as electrical insulators and as the dielectric in capacitors; ground mica is used in paints, inks, wallpaper, rubber, and waterproof coatings.