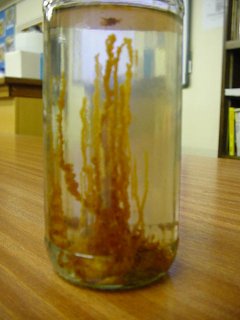 A silicate is any salt of silicic acid. All silicates contain silicon, oxygen, and one or more metals, and may contain hydrogen. Discrete silicate anions (negative ions) include orthosilicates (SiO4-4), metasilicates (SiO32-), and groups of SiO4 units linked by Si–O–Si bonds; such condensation also produces infinite anions in chains, layers, or three-dimensional arrays.

Silicates (including aluminosilicates) are the largest and most important group of rock-forming minerals, making up more than 90% of the Earth's crust. The SiO4 units may form single or double chains (as in pyroxene or amphibole), sheets (as in mica), rings (as in beryl), or ionic bonds to a metal (as in olivine). Silicate minerals, such as feldspars, garnet, and mica.

Glass is a mixture of silicates with small amounts of other substances. Sodium silicates are used in adhesives and in the production of detergents. Quartz (SiO) is usually regarded as a silicate mineral.

Water glass is an aqueous solution of sodium silicate (Na2SiO3) – a concentrated, syrupy alkaline – made by fusing sodium carbonate with silica. It is used to preserve eggs, as a cement, in ore flotation, and for water- and fire-proofing.

Water glass can also be used to grow "crystal gardens." Crystals of various colored metal salts, such as copper sulfate, iron sulfate, and iron chloride are added to a jar containing a 50% solution of water glass. The corresponding metal silicates are formed as structures that resemble alien plants.