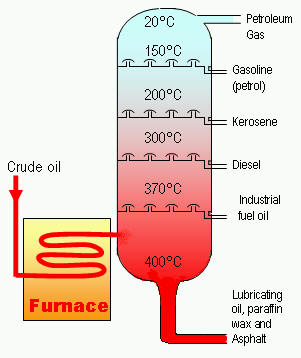 Fig 2. A cracking chamber in which crude oil is separated into various grades of fossil fuels, including kerosene.

Petroleum is a naturally-occurring mixture of hydrocarbons, usually liquid 'crude oil,' but sometimes taken to include natural gas. It is believed to be formed from organic debris, chiefly of plankton and simple plants, which has been rapidly buried under marine conditions unfavorable to oxidation. After some biodegradation, increasing temperature and pressure cause cracking, and oil is produced. As the source rock is compacted, oil and water are forced out, and slowly migrate, laterally and vertically, to porous reservoir rocks, chiefly sandstone and limestone. Finally, secondary migration occurs within the reservoir as the oil coagulates to form a pool, generally capped by impervious strata, and often associated with natural gas.

Some oil seeps to the Earth's surface: this was used by the early Mesopotamian civilizations. But most petroleum is extracted via oil wells from reservoirs in the Earth's crust sealed by upfolds of impermeable rock or by salt domes which form traps (Fig 1). The first oil well was drilled in western Pennsylvania in 1859. The industry thus begun has grown so fast that it now supplies about half the world's energy, as well as the raw materials for petrochemicals.

Modern technology has made possible oil-well drilling to a depth of 5 km, and deep-sea wells in 150 m of water. Rotary drilling is used, with pressurized mud to carry the rock to the surface and to prevent escape of oil. When the well is completed, the oil rises to the surface, usually under its own pressure, though pumping may be required. After removing salt and water, the petroleum is refined by fractional distillation, producing the fractions gasoline, kerosene, diesel oil, fuel oil, lubricating oil, and asphalt (see fractionation). Undesirable compounds may be removed by solvent extraction, treatment with sulfuric acid, etc., and less valuable components converted into more valuable ones by cracking (see Figure 2), reforming, alkylation, and polymerization (forming into polymer). The chemical composition of crude petroleum is chiefly alkanes, saturated alicyclic compounds, and aromatic compounds, with some sulfur compounds, oxygen compounds (carboxylic acids and phenols), nitrogen, and salt.

Gasoline, also known (in the UK) as petrol, is a mixture of volatile hydrocarbons with 4 to 12 carbon atoms per molecule, which is used as a fuel for internal-combustion engines, and as a solvent. Although gasoline can be derived from oil, coal, and tar, or synthesized from carbon monoxide and hydrogen, almost all is produced from petroleum by refining, cracking, and alkylation, the fractions being blended to produce fuels with desired characteristics. Motor gasoline boils between 30°C and 200°C, with more of the low-boiling components in cold weather for easy starting. If, however, the fuel is too volatile, vapor lock can occur – i.e., vapor bubbles form and hinder the flow of fuel. Aviation gasoline contains less of both low- and high-boiling components. The structure of gasoline components is also carefully controlled for maximum power and efficiency, as reflected by the octane rating; this may be further improved by antiknock additives. Other additives include lead scavengers (ethylene dibromide and dichloride), antioxidants, metal deactivators (which remove metal ions that catalyze oxidation), anti-icing agents, and detergents.

Kerosene, also known as paraffin and paraffin oil, and sometimes spelled 'kerosine,' is a light petroleum distillate, being a mixture of volatile hydrocarbons having 10 to 16 carbon atoms per molecule. Kerosene is used as a fuel for jet engines and rockets (especially in a form known as RP-1), for space heating and lighting, cooking stoves, and as a solvent and paint thinner. Although it can be derived from oil, coal, and tar, most kerosene is produced from petroleum by refining and cracking. Kerosene boils between 150°C and 300°C.