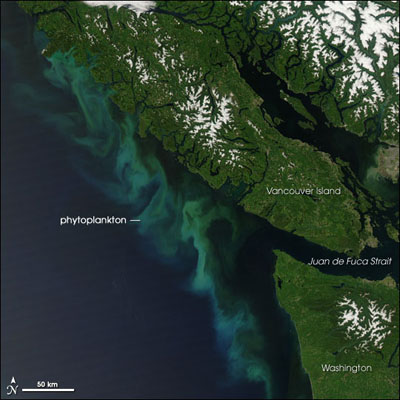 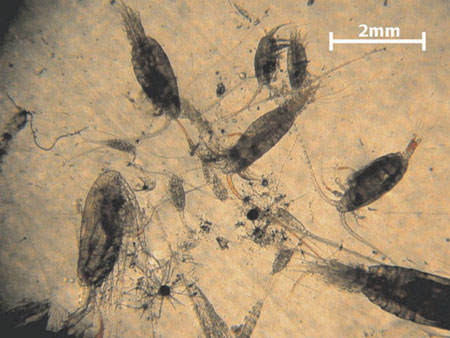 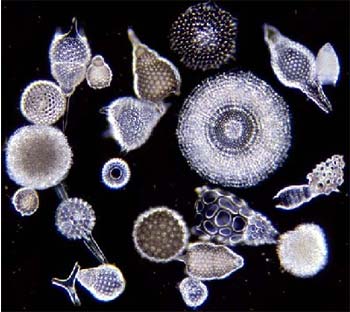 Plankton are any of the very small floating or drifting life forms of the ocean, especially those near the surface. There are two main kinds of plankton: phytoplankton, which comprises floating plants, and zooplankton, which are floating animals. Phytoplankton may be so numerous as to color the water and cause it to have a 'bloom' (see Figure 1); they are eaten by zooplankton, which in turn are an important food for large animals such as whales and countless fishes such as herring.

Phytoplankton are confined to the upper layers of the sea where light can reach, but zooplankton have been found at great depths. Plankton drift under the influence of ocean currents and are vitally important links in the marine food chain.

Phytoplankton are free-floating, oceanic plants life. Most of the organisms are microscopic and include diatoms, dinoflagellates, and algae.

Phytoplankton are the 'producers' of the ocean because they make food for themselves by transforming energy from the Sun via photosynthesis. This energy is carried up the food chain as one animal eats the next. Since phytoplankton support all other animals in the food chain, their population size and the timing of their population increases or 'blooms' are important.

Zooplankton are free-floating, oceanic animal life (Fig 2). They consist of a wide variety of small organisms, such as copepods, radiolaria, krill, and larval forms and eggs of higher animals such as crab, jellyfish, and fish. Zooplankton graze upon phytoplankton as they ride the ocean currents, and are themselves eaten by whales, small fish, invertebrates, and birds. Few levels or areas of the ocean are devoid of zooplankton, and they form a central constituent of the oceans' food chains.

The shrimplike krill, some of the most important animals of the plakton, are about 5 cm (2 in) long when fully grown. They belong to a group of crustacenas (found in all oceans) characterized by luminescent organs along their sides, on their undersides, and on their heads. Euphausia superba is the most important species of the Antarctic seas because it supports much of the warm-blooded life of the southern oceans. Many birds, including the Adélie penguin, macaroni penguins, and shearwaters, eat it almost exclusively , as do the crabeater seal, the blue whale, the humpback, and other baleen whales. In its first year a blue whale easts up to 450 tonnes of krill.

A radiolarian is any protozoan of the class Polycystinea (superclass Actinopoda). Radiolaria are found as zooplankton in the upper layers of all oceans. They are mostly spherically symmetrical and known for their tiny, complex, perforated skeletons, known as tests, which are usually composed of silica (Fig 3).