Fish among the plants on the sea bottom.

Anatomy of a bony fish. 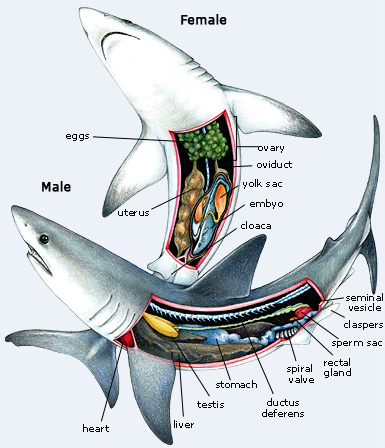 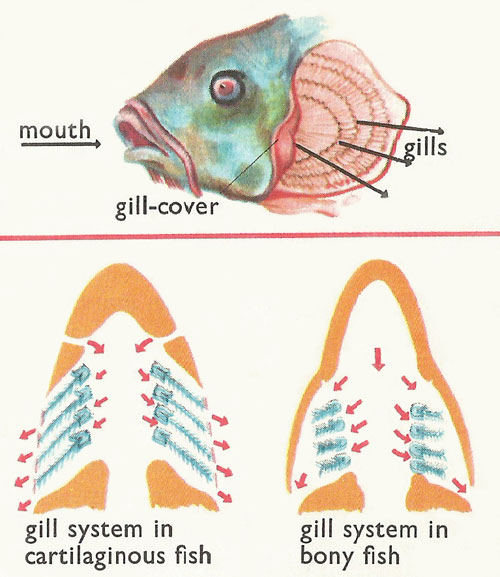 Circulation of water through the gills. (The arrows show the direction of the water.) 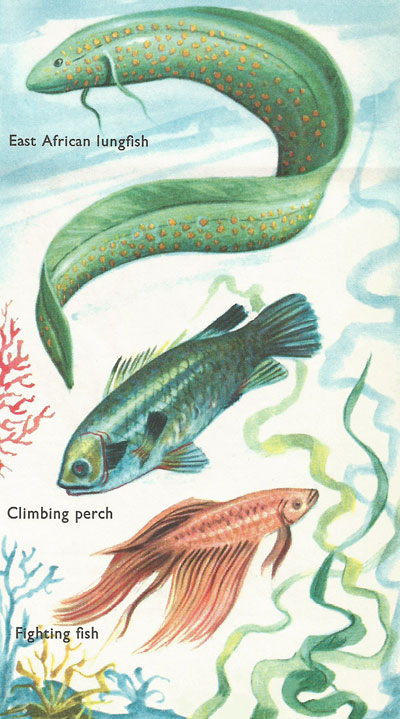 Types of fish capable of breathing in air.

A fish is a cold-blooded vertebrate that lives in water and uses gills for providing oxygen to the blood. Fish typically have fins, scales, a slender body, and a two-chambered heart. There are three main groups: the bony fish or Osteichthyes (e.g., goldfish, tuna); the cartilaginous fish or Chondrichthyes (e.g., sharks, rays); and the jawless fish or Agnatha (e.g., hagfish, lampreys). About 30,000 fish species are known of which approximately 2,500 are freshwater. The zoological study of fish, including their classification, structure, distribution, and ecology, is called ichthyology.

Most fish have an internal skeleton mainly composed of bone. The bony fish include the teleosts, lungfish, and several surviving primitive forms, such as the bichir, gar-pike, and sturgeons (in the latter, bone is very much reduced and the skeleton is almost wholly made of cartilage).

In shape the typical teleost (e.g., salmon) is more streamlined than that of the cartilage fish (see below), being more flattened from side to side. The tail is usually symmetrical. The paired fins are small and have supporting rays. The scales are thin and flat, not tooth-like as in sharks. The mouth is larger and the lower jaw more mobile than that of sharks. The gills are covered by a flap, the operculum, and the skull has a complicated structure. The jaws are made up of several bones. The vertebral column is better developed than in sharks and bears more prominent ribs. Thin protective pads (the remains of the notochord) occur between each of the vertebra. A feature not found in sharks is the air bladder – an air-filled sac used as a floatation device. The brain is better developed than in sharks.

The sharks, rays, and skates have an internal skeleton of cartilage – bone is absent. They are the simplest of living vertebrates with jaws.

The skull is more developed than in the jawless fish (see below). In all except the king herrings the gill slits are visible and not covered by a gill flap or operculum as in bony fishes. The gills are respiratory.

The notochord is reduced in comparison with that of the jawless fish and is largely replaced by vertebrae – short ribs are present in the front region. Movement is produced mainly by the serial contraction of the fibers of successive muscle blocks – arranged essentially as in simpler chordates. The gut is more elaborate and divided into more obvious regions.

The simplest of fish, and the simplest of all vertebrates, are the jawless fish, which include the lampreys and hagfish. These creatures have no jaws. The mouth is surrounded by a large, round sucker. The tail has a fin which extends forward halfway along the back and the muscle blocks are W-shaped. The skeleton is made up of the notochord and cartilage.

To breathe means to take a certain amount of oxygen into the organism (a living animal or plant) and to expel carbon dioxide into the atmosphere. This is one of the indispensable conditions that enable an organism to live.

The cells that make up a living organism need oxygen; and they also need to rid themselves of the carbon dioxide that is produced during oxidation. If we hold our breath for a little while, we usually have to breathe very deeply afterwards, and this is less because our blood lacks oxygen than because accumulated carbon dioxide stimulates the action of our breathing muscles.

The first creatures to live on our planet inhabited the sea, and they were probably composed of one, or a few cells only. They received their nourishment and oxygen directly from the water and poured the rejected gases into it, and thus had no need of a respiratory system. With the passage of millions upon millions of years, the number of cells in the body increased to more complex organisms. As the body grew in size, it needed an outer covering to protect it. As a result of this most of the cells lost contact with the outside world and were unable to take in oxygen directly, and so organs capable of distributing oxygen to all the cells and bringing away carbon dioxide had to be formed.

And that is the origin of gills. Gills consist of lamellae, or thin plates, richly supplied with blood vessels and situated on the side of the body. Their walls are very thin in order to facilitate the exchange of gases between the blood, which surrenders the carbon dioxide and the water containing dissolved oxygen. The oxygen-bearing blood then carries the precious element through the arteries as far as the smallest cells.

Then came the time when some of these animals ventured on land, but before they could do this they had to develop respiratory organs that would be suited to their new surroundings – in other words they had to develop lungs. Lungs are internal organs protected against the rapid evaporation that is brought about in the atmosphere. For the fact is that an exchange of gases during breathing can take place only through surfaces surrounded by a film of water, which explains why fishes die of asphyxiation when they leave the water, and enter the atmosphere even though the oxygen here is richer; the air dries the wall of the gills which are therefore unable to function. Crabs and lobsters, whose gills are protected and do not dry so quickly, can survive for a long time out of water.

The oxygen dissolved in water comes first and foremost from the atmosphere which is in permanent contact with the surface of seas and rivers; and secondly from all the plants that grow under the water. Yet in spite of this, water contains very much less oxygen than is contained in the atmosphere. Fish have adapted themselves to surroundings poor in oxygen by limiting their breathing requirements. Moreover the bodies of fish, unlike those of birds and mammals, do not remain at a constant temperature whatever the ups and downs of the temperatures around them; they take on the temperature of the water in which they live. If this temperature changes suddenly the fish get ill and die; but fortunately the temperature of water does not undergo such sudden changes as that of the atmosphere and land.

Gills are outgrowths of skin, much folded to present a greater surface-area through which the exchange of gases can take place. Each gill-filament, as it is called, is supported by a bar of bone or cartilage, known as the gill-arch. In some fish, such as sardines and herrings, a comb-like inner edge serves to catch the minute organisms that make up the plankton on which the fish feed. The gills lie in chambers placed symmetrically on either side of the body just behind the head. The water flowing across the gills passes in through the mouth and into the pharynx, then enters the 'chamber' and goes out again with the rising or opening of the gill-cover. In fishes with cartilaginous skeletons the gills communicate directly with the outside by means of five (selachii, as they are called) the water is taken through a pair of small openings just in front of the gills, known as spiracles.

Suppose we place the same liquid in two containers separated by a semi-permeable membrane, and suppose we dissolve in this liquid the same gas at the same pressure: no exchange will occur as between one container and the other. But if we increase the pressure in one of the containers – then the gas in the container with the greater pressure passes through the membrane into the other container. This displacement goes on until the gases have reached the same pressure in both containers. Now this is the principle which comes into play when an exchange is brought about between the oxygen dissolved in water and the blood contained in the vessels of the gills. There is a difference of pressure between the free oxygen and that contained in the blood vessels and this brings about the displacement of the gas into the blood.

There are some kinds of fish that can absorb the oxygen in the air and hence are able to gulp air at the surface or, in some instances, to leave the water for given periods of time.

The lungfishes belong to the dipnoi group, a type of very early origin which could almost be looked on as the ancestors of all land animals. The dipnoi can obtain oxygen by taking atmospheric air into an organ resembling a lung but called a swim-bladder. The lungfishes, of which there are five species still surviving, can reach a maximum length of 6 feet. One species is to be found in East Africa, particularly in stagnant ponds or marshes. During the day it lies on the muddy bed, but when dusk falls it rises to the surface and breathes air. In the dry season when the marsh dries out, the lungfish curls up in the mud, leaving a small opening for air. There it remains in a state of lethargy, feeding on its fat, until the return of the rains.

This fish is found in the fresh waters of southern Asia. It is one of the labyrinthic fishes so-called because they have a special breathing chamber, rich in blood vessels and used for breathing air which has been developed above the gills, and this is sometimes so complicated that it resembles a labyrinth. The climbing perch is so named because it used to be thought that it climbed trees. It has the habit of migrating at night from one pond to another, and of coming out of water after rains to feed on earthworms.

These beautiful, brilliantly-colored creatures are up to 6 in long and often to be seen in aquaria. Fighting fish need to breathe oxygen of the atmosphere every now and then, and they take it in through organs just above their gills, surface every so often and gulp air with wide-open mouths. Fighting fish are very pugnacious, as their name suggests. When two males meet, they spread out their fins and gill-membranes to the maximum, become even more brilliantly colored, and engage in combat. Often they fight until one of them dies.