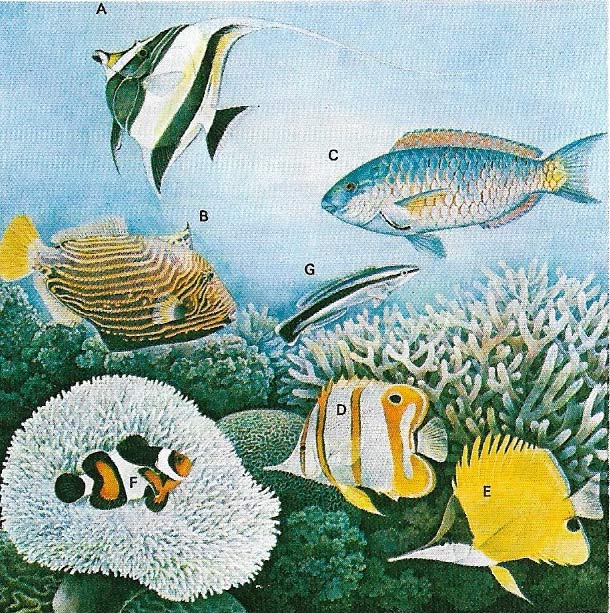 Fig 1. The fish of tropical coral reefs are often brightly colored. Many, such as the moorish idol (Zanclus canescens) (A) and the long nose butterfly fish (Chelonia rostratus) (D), are striped for camouflage. The forceps fish (Forcipiger longirostris) (E) has false, rear "eyes" to confuse predators such as the triggerfish (Balistipus sp) (B). Safety from predators is, for the clown anemone fish (Amphiprion percolate) (F), provided by the shelter of a sea anemone's arms and, for the cleaner wrasse (Labroides sp) (G), by its eating of the parasites that infest the predators. The parrot fish (Scarus sp) (C) feeds on coral which it bites off in large pieces with its hard, bony jaws. 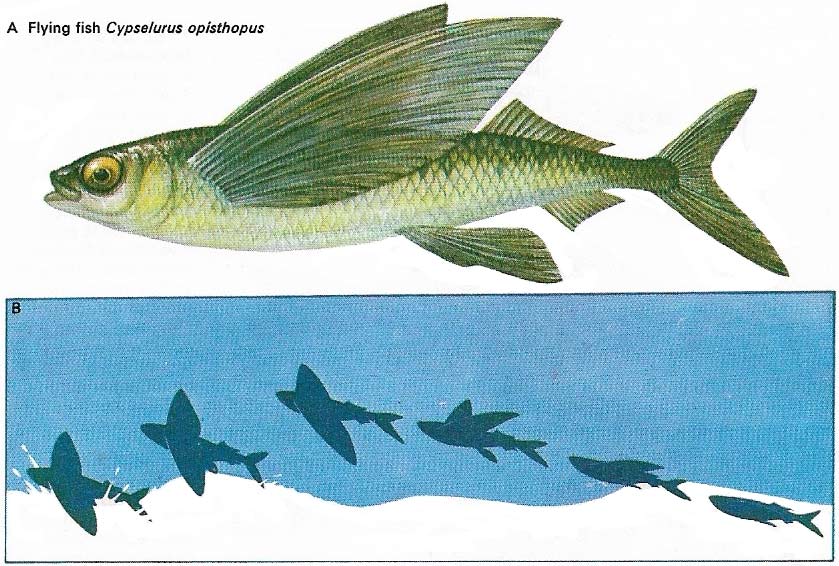 Fig 2. The flying fish (A) has developed wing-like pectoral fins that enabled it to glide through the air. To emerge from the sea (B) it holds its fins close to its body, takes off from the crest of a wave then spreads its fins to climb and glide.

Fig 3. The blue trunk fish and its relative the globe or puffer fish have unique defence mechanisms. The body of the trunk fish is encased in solid bony armor while the puffer fish can inflate into a ball shape when danger threatens.

Fig 5. The life history of the freshwater eel starts in the Sargasso Sea where the adults spawn and then die. The tiny larvae, known at this stage as leptocephali, are swept slowly northwards on the Gulf Stream. It then takes them three years to reach the coasts of Europe where they exchange their somewhat fishlike shape for that of a tiny eel. At this stage they are transparent "glass eels" or elvers. During the next stage they migrate inland up the rivers. Eels in the freshwater phase of their life cycle are know as yellow eels. This phase lasts for about a year and then gradually over the next six years the adult eels change from yellow to silver. Not until they are about 10 years old do they start the journey back to the Sargasso Sea to spawn. What induces and guides the migration of eels is still something of a mystery. But it is now thought that very few European eels return to the Sargasso Sea. Most of the adults spawning there seem to have made their way down from the coasts of North America and European eels probably come from these. 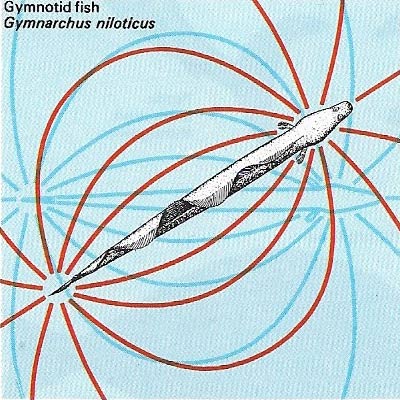 Fig 6. The gymnotid fish is one of the so-called electric fish. It belongs to the weakly electrogenic species that emit regular pulses of current from electric organs modified from muscle or nerve. Their stiff-spiked posture enables such fish to detect objects in their environments as disturbances in the electrical field. Special centres in the nervous system control the electric impulses but how the information is interpreted is yet unknown. 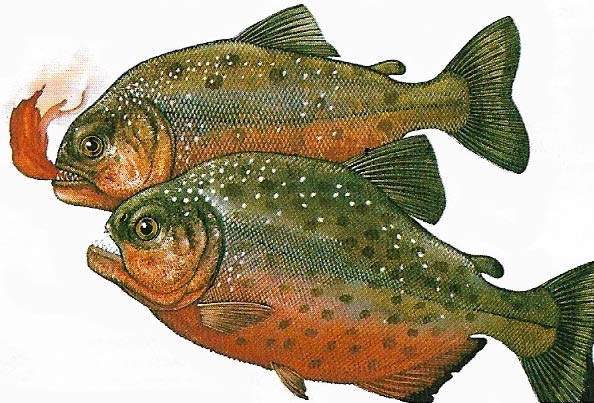 Fig 7. The red piranha of South America is notorious for its ferocity which, allowing for popular exaggeration, is still formidable. It has powerful jaws full of very sharp teeth, and makes up for its small size – 35 cm (14 in) long at the most – by swimming quite often in large shoals. These represent a threat to larger fish and land animals and even to man. They feed in bouts rather than continuously and locate their prey by means of their sense of smell which leads them, for example, to any flesh that has already been torn and is bleeding. They will eat dead flesh as well.

Fig 8. The angler fish is a sluggish predator that lies half concealed in mud waving an appendage developed from the dorsal fin. Smaller fish, attracted by the lure, approach the angler and are sucked into its huge mouth. 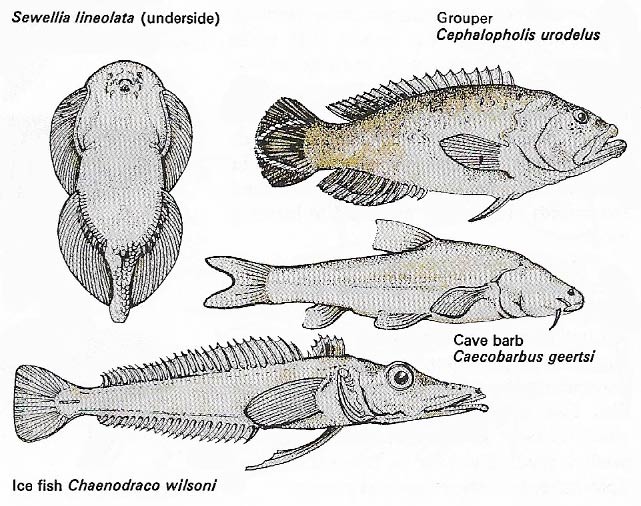 Fig 9. Fish live in almost all aquatic habitats. Some have become adapted to living in extremely inhospitable regions. The grouper inhabits the warm waters of tropical coral reefs while from the freezing Antarctic seas come ice fish. In torrential streams the modified fins of Sewellia lineolata serve as suckers. Fish even inhabit caves: the blind cave barb is an African example from Zaire.

Fish have evolved, over a period of 400 million years, an amazing variety of special adaptations to the different environments in which they live. Some of the deep-sea fish – those that lurk at least 3,000 m (9,850 ft) down in the viscous abyssal depths – display the most bizarre shapes. In contrast the tropical fish of the coral reefs (Fig 1) have some of the most brilliant coloring to be found anywhere in the animal kingdom. Each peculiarly, ugly or beautiful to human eyes, has its own vital significance to the fish.

Deep-sea fish have two special problems: the high density of water more than 180 m (600 ft) down, which they overcome by having a lightweight skeleton; and the gloom, which, for many, is adequately coped with by the possession of luminous organs. Some fish provide their own luminosity through photophores, which are modified mucus glands. But others use light from luminous bacteria that colonise certain organs where the fish can expose or reveal them, for example, by a fold of skin. Luminous organs are exploited by abyssal fish to attract and lure not only members of the same species and opposite sex but also other species on which they feed.

Many deep-sea fish have weak jaws with large teeth, in contrast to some of the coral reef fish that have powerful armored jaws. One group of these, the parrot fish, bite off chunks of coral which are ground up and expelled, after passing through the gut, as a cloud of chalk dust. The vivid iridescent colours of these fish are ingeniously made up from the interplay of a few pigments – black, red, orange or yellow. This remarkable range of colors is involved in sexual display but poisonous species may also use distinctive coloration as a warning to predators.

A notoriously voracious predator is the small piranha (Fig 7), which has formidable teeth and an aggressive temperament so that it actually poses a threat to species as large as man. The Puffer fish (Fig 3) protects itself, as its mane suggests, by puffing itself up in order to appear twice its real size and perhaps to deter attempts by other species to swallow it.

The puffer manages a temporary change in its shape by a special adaptation of its fuller, but many fish, such as the seahorse, have evolved more profound and permanent adaptive changes in form. A fairly typical feature of bottom-dwelling deep-sea fish is the possession of a long thin tail, which, by increasing the length of the lateral line helps the fish detect prey more easily. At the other end of the scale is the flying fish (Fig 2), the spectacular adaptation of whose pectoral fins allows it to glide for several metres through the air when propelled from the water by its tail. Usually the fish can rise no higher than 1.5 m (5 ft) above the surface of the water but in favorable conditions can increase this height to more than 7 m (23 ft).


Adaptations of the sexes

Sometimes through evolution of form, the two sexes of one dish species become very different. The most grotesque example of such sexual dimorphism is that of the deep-sea fish Photocorynus in which the male never grows larger than about 10 cm (4 in) and leads a parasitic life permanently attached to the female. The virtue of this arrangement is that the female does not have to scour the dark ocean depths in a sparse population to search out a mate every time she has eggs that are ready for fertilization.

Some fish have reproductive habits as bizarre as the differences between the appearance of the sexes. In the case of the seahorse, for example, the male has developed a pouch and it is he who nurtures the developing young, instead of leaving them unguarded as is normally the case. Many cichlid fish (Fig 4) retain the conventional division of reproductive labour between the sexes but some females appear to spit their young into the world, as a result their peculiar practice of hatching the eggs in their mouths. Immediately the eggs are laid the female takes them into her mouth. The male has egg-like specks located round the anal opening so that the female, while attempting to pick up the extra "eggs", takes in his sperm and fertilizes the real eggs.

For fish such as eels (Fig 5), salmon and steelhead trout spawning can be the end of a very long journey. Salmon return to their native streams to breed after spending a year or more at sea. Pacific species are known to arrive back after travelling between 1,600 and 3,200 km (1,000 to 2,000 miles) and the evidence suggests that they are able to recognise their general course by means of a sun-compass sense of direction and the details of the last parts of their journey by using their well-developed sense of smell.

Electric organs (8) have developed independently in no less than four families of bony fish and also in the cartilaginous torpedoes and rays. These organs are all thought to be derived from muscle and are usually arranged in a series of plates forming an organic battery. Some fish are capable of generating large voltages. One of them, the electric eel (Electrophorus sp), which lives in the Amazon, can generate more than 550 volts. These large voltages are probably used for protection of paralysing prey; most fish that process electric organs live in muddy or turbid water generate weak visibility is restricted. These fish generate weak electric fields which are thought to enable them to navigate and find prey but not to kill it.