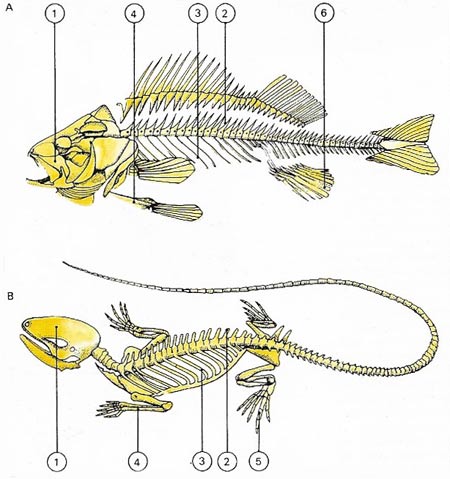 Fish, reptiles, birds and mammals are all vertebrates with essentially similar skeletons. The fish (A) and the lizard (B) both possess similar skeletal features such as a skull (1), a backbone (2), ribs (3) and limb support bones (4). The lizard's foot (5) is an evolutionary development of the fish's fin (6) and has the 5-toed pattern typical of vertebrates. 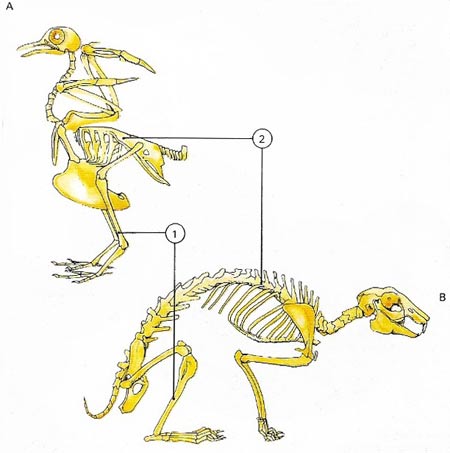 The differences between the skeletons of a bird (A) and a mammal (B) reflect the differences in their ways of life. The limb bones of birds (1) are reduced and fused as are those of the backbone (2). The mammal, having no need for lightness, tends to have larger and heavier bones.

A vertebrate is any of a subphylum (Vertebrata) of chordates having individual disks of bone or cartilage called vertebra surrounding or replacing the embryonic notochord to form a jointed backbone that encloses the spinal column. Vertebrates include:

Vertebrates differ from other chordates in having a skull, which surrounds a well-developed brain, and a skeleton of bone or cartilage. Other distinctive features of vertebrates include:

Vertebrates have existed on Earth for more than 500 million yr, from the late Cambrian to the present day. The first vertebrates lacked jaws, like the living hagfish and lampreys. Jawed vertebrates appeared 100 million yr later, in the Silurian.