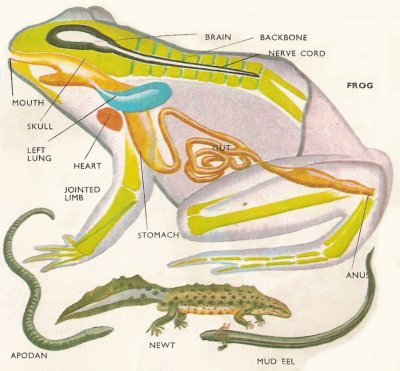 Fig 1. Anatomy of a frog and some other examples of amphibians. The frog uses its lungs, skin, and buccal cavity (mouth) for breathing. By means of the hyoid bone in the throat, which lowers the cavity floor, air is drawn through the nostrils. The frog's eyes are set high one the head for improved vision. The tongue is used to catch food. The heart, typically amphibian, has two atria and one ventricle. The eardrum is visible superficially. 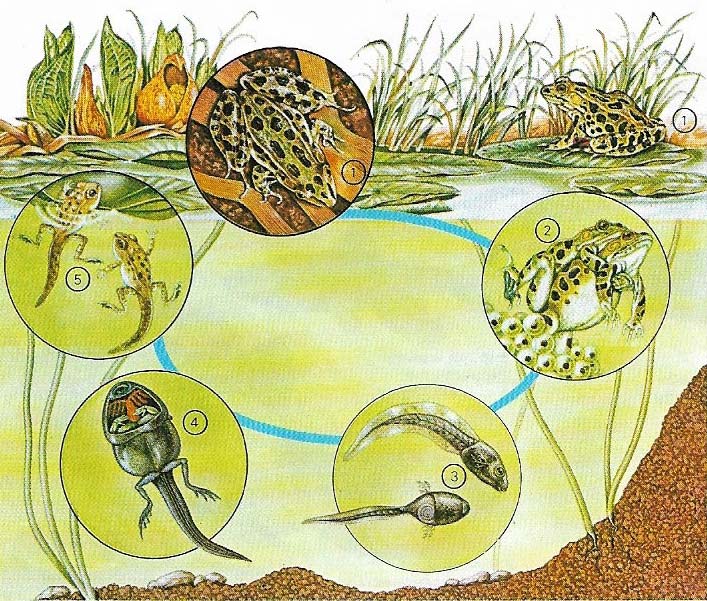 Fig 2. The life cycle of the North American leopard frog (Rana pipiens) begins when the adult frog (1) leaves the long grass of a wetland meadow and returns to a pond or stream to breed (2). A few days after the eggs hatch, the tadpoles have external gills (3). After 8 weeks, hind limbs are well developed (4). Young frogs at 3 months have limbs developed but still have a tail (5). 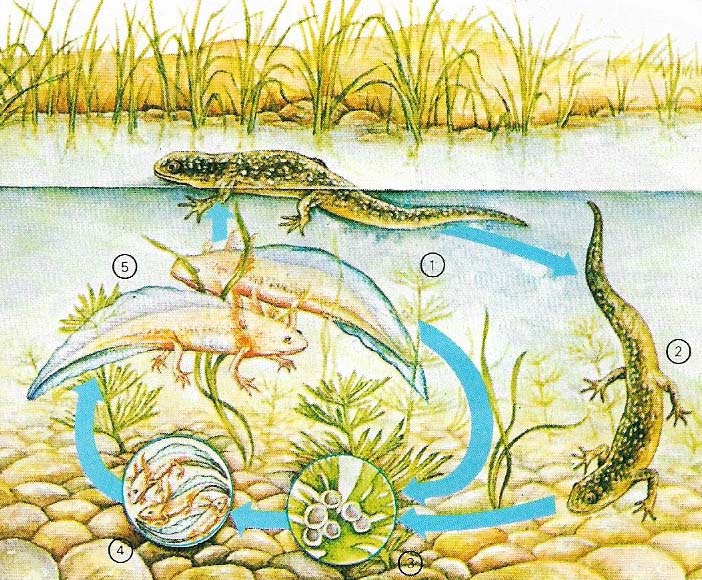 Fig 3. The phenomenon of pedogenesis is seen in the Mexican salamander. Adult male spermatophores (1) are picked up by the relate (2) and the fertilized eggs are laid on waterweed (3). The larva has external gills (4). The fully-grown sexually immature larva (5) develops reproductive ability. At higher than normal temperatures and iodine concentrations, sexually mature larvae will metamorphose. 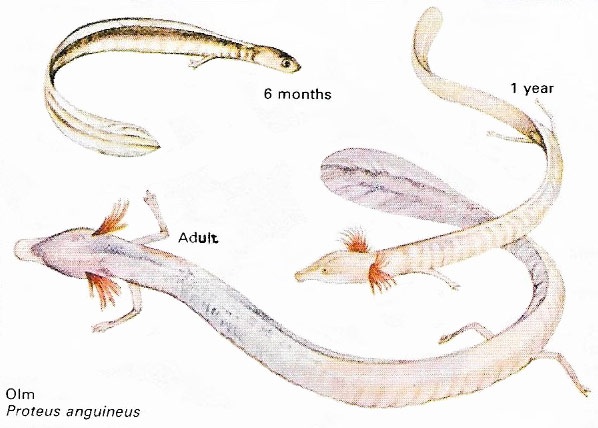 Fig 4. The olm (Proteus anguineus) is a neotenous amphibian that lives in caves. The young have eyes and are dark-colored like salamanders but these features soon disappear in the adult forms. 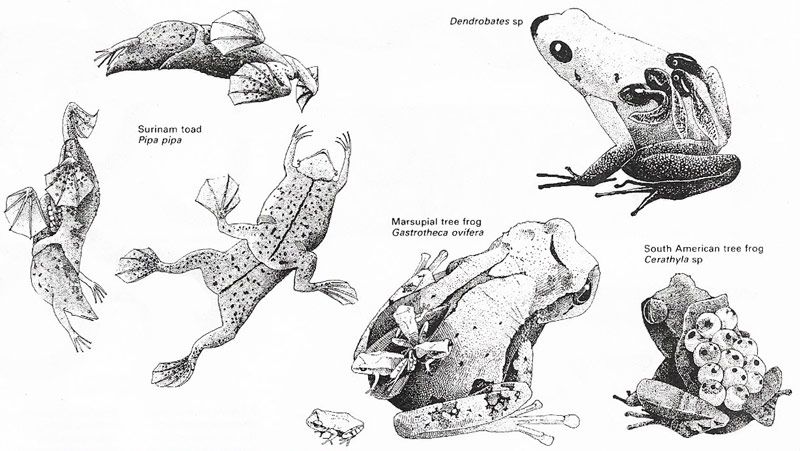 Fig 5. Specialized breeding methods are used by many different species of frogs and toads. In tropical areas, eggs may be laid in a nest of leaves or attached to a twig over a stream or pond so that when the tadpoles hatch they fall into the water to continue developing. These methods have the merit of giving protection from predators in the vulnerable egg stage. Another protective step is for the parents to carry the eggs. The male on the European midwife toad (Alytes obstetricians) winds the eggs around his hind feet and carries them until they hatch. The ultimate in parental care is shown in tropical species whose young hatch directly from the female's back. Frogs that show this degree of protective care produce fewer young but the chances of survival are much greater than in species that lay a large number of unprotected eggs. The male Surinam toad (Pipa pipa) courts the female by uttering metallic calls, then holds her in his arms. The sticky eggs are fertilized as they are laid singly and fall on to the female's back, sinking in so that the skin covers them. The young do not go through a true tadpole stage but hatch out from the female's back 3–4 months later. The South American tree frog (Cerathyla sp) carries her eggs in a basket-shaped hollow on her back until they are ready to hatch in a cup of rainwater formed in a leaf. The tadpoles of the South American frog Dendrobates are carried on their father's but but their development is completed in the water. In the "zip-bag" birth of the marsupial tree frog (Gastrotheca ovifera), about 20 fully formed young frogs hatch out from a pouch on the female's back.

Fig 6. Amphibians move on land by various methods. (A) A newt walks by raising its body on to legs which act like levers. The backbone acts like a girder by carrying the weight of the body. When frightened, a newt can wriggle along on its belly. (B) A frog's long hind legs give very good leverage for jumping. Both legs are thrust simultaneously to produce a highly effective leap.

An amphibian is a vertebrate organism of the class Amphibia, which includes frogs, toads, salamanders, and some types of newts, having an aquatic early stage (e.g., tadpole) and developing air-breathing lungs as an adult (e.g., frog). There are three living orders: Urodela (newts and salamanders), Anura (frogs and toads), and the little-known Apoda (the caecilians). Some 3,000 species have been identified, distributed worldwide. Additionally, there are two fossil groups: Lepospondyla and Labyrinthodonta.

In contrast to fish, amphibians have a smooth, scale-less skin (except for some caecilians), which plays a role in respiration. The paired limbs are jointed structures, and though the basic number of fingers is five, many amphibians have less than this. Living on land, their body has to be supported (the weight of water-dwelling creatures is supported by the water) and the backbone acts as a girder transmitting the weight to the four legs.

When moving quickly, newts wriggle in a way that resembles that of fish, but slow movement is brought about by the movement of the legs, the body being raised up off the ground. In frogs the skeleton and musculature are specialized for jumping and swimming – the number of vertebrae is much reduced. Adult frogs have paired lungs. Only the tadpoles have gills, though some adult salamanders retain their gills.

Amphibians of temperate regions commonly hibernate because they are cold-blooded and become sluggish at low temperatures.

Amphibians evolved from fish-like ancestors 350 million years ago in the upper Devonian period. At that time local fern-fringed swamps were vacant and provided ideal humid conditions for the first conquest of the land by animals with no means of conserving their body water.

We know from fossil evidence that the first amphibians resembled giant salamanders with elongated heads and well-developed tails. These animals, often more than 1 m (39 in) long, moved slowly and clumsily, carrying their have bodies from one pool to another. By the Carboniferous period, many different amphibians formed had evolved. These creatures led slow but untroubled lives with little competition from other animals and an abundance of food.

The change from life in water to life on land posed many problems and it took the amphibians many millions of years to become adapted. In fact amphibians never completely adapted to this harsher environment and still need water to continue breeding.

To move more efficiently, amphibians developed lightweight skeletons and strong muscles to lift their bodies off the ground (Fig 6). The limbs of many of the earlier amphibians were awkward structures with large bones and widely expanded hands and feet, though they showed the typical five-fingered (pentadactyl) limb pattern of higher vertebrates. In order to breathe, the amphibians used a new method of respiration that involved paired air sacs or lungs.

Of the many amphibian groups that once existed, there are only three modern orders: the Anura (frogs and toads), the Urodela (newts and salamanders) and the smallest group, the Apoda or caecilians (elongated, blind and burrowing forms).

There is a great diversity of frogs and toads with over 2,500 species adapted for life in habitats which, apart from wet lands, include tropical forest, grassland and even deserts. A common feature of frogs and toads is that they undergo a complete change in their form (known as metamorphosis) during their history (Fig 2).

Male frogs and toads usually call to attract females for breeding and also in response to danger. Both sexes have vocal organs but only those of the male are fully developed. The typical croaking noise is produced by the vibrations of the vocal cords, a pair of folds of membrane in the larynx. Air is passed backwards and forwards between the lungs and the vocal pouches, formed below the mouth.

Nearly all temperate species of frogs and toads migrate their way to water in the spring. They find their way with the help of special sensory cells – osmoreceptors – in their mouths. Certain ponds seem to be especially attractive – for reasons unknown – and enormous numbers congregate there in the mating season. The males usually precede the females and then attract them by calling.

The larval forms of frogs, toads, newts and salamanders all have external gills for respiration in water but these are lost in most adult forms. Mature frogs can breathe in three ways (Fig 1). They use their lungs when highly active, the floor of the mouth (buccaneers cavity) when feeding and their moist skin when hibernating. The skin is kept moist by secretions from mucus glands in the outer layer of the skin, the epidermis. The skin may contain poison glands which are well developed in tropical frogs such as Dendrobates and Phyllobates. The virulent poison secreted is used on arrows by South American Indians to paralyse prey such as birds and monkeys. Many of the poisonous amphibians are brightly colored, thus warning predators to leave them alone. The use of color for camouflage is highly developed in the amphibians. Three layers of pigment cells in the skin can produce color changes by expansion and contraction.

Newts and salamanders show less deviation from the generalized amphibians than do the more specialised frogs and toads. The body shape is usually lizard-like with a distinct head. Adult and larval forms are very similar and do not generally show the complete metamorphosis typical of frogs and toads. There are eight families with approximately 225 species. Like frogs and toads, they generally breed in the water. Most of them lay eggs and internal fertilization is common. The male releases a packet of sperm (spermatophore) which is taken up by the female using her cloaca.

Newts become brightly colored during the breeding season and there is often an intense courtship display. Some salamanders exhibit neoteny, in which the adult retains features of the young larvae, such as well developed external gills and translucent unpigmented skin. In pedogenesis (Fig 3) the creature reaches sexual maturity in the larval stage. An example is the axolotl (Ambystoma mexicanum).

The caecilians are the smallest and least well known group of amphibians. Many are burrowing and all are limbless, showing such interesting primitive features as the retention of scales in the skin. They have vestigial eyes whose function is largely replaced by special sensory "tentacles" with which they feel their way through the earth. One of the better known species is the Ceylonese caecilian (Ichthyopis glutinosus), first studied at the end of the nineteenth century.