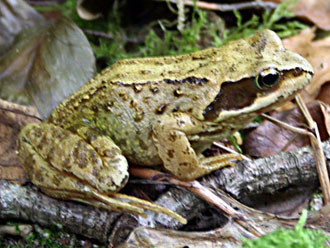 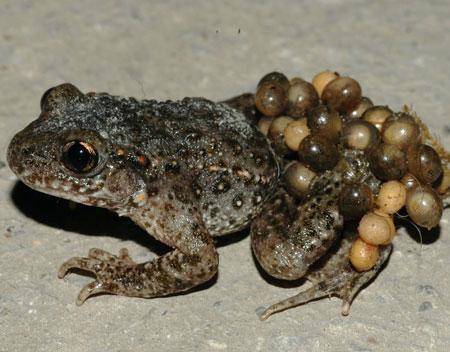 Anura is an order of amphibians (class Amphibia) that includes the tailless forms, i.e., frogs and toads. About 2,600 species have been identified, these being widely distributed in both temperate and tropical regions. The anurans have long hindlimbs which enable them to jump and, in the case of some frogs, to swim powerfully. They breed in water and the larva, or tadpole, has a tail which is lost as adult features develop. There are tree-dwelling, burrowing, and completely aquatics species.

Adult common frogs (Rana temporaria) spend the cold winter months in a state of inactivity, hidden under logs and stones or buried in mud. They awaken in early spring and return to the water. As a rule, the males return first and, by their croaking, attract the females. Pairing takes place in the water without any courtship display. As the female discharges her eggs the male releases sperm over them and fertilization follows. The eggs are covered with jelly which quickly swells on contact with the water. It keeps the eggs together and protects them.

After fertilization, each egg-cell begins to divide and, within a few days, the black sphere elongates and develops a head and tail. The tadpole hatches in about 10 days and attaches itself to a plant by means of a sticky gland. The mouth is not yet fully formed and the young tadpole exists on the yolk material from the egg. About three days after hatching, the mouth opens and the tadpole then begins to feed on algae. By this time three pairs of delicate external gills have developed.

During the next few weeks the tadpole grows rapidly and important changes take place both internally and externally. Internal gills are formed. These are respiratory openings connecting the mouth and the outside. A fold of skin (the operculum) covers them and opens at a single point (the spiracle) on the left hand side. The external gills disappear, and. apart from its large head the tadpole is like a fish. However, the legs soon begin to develop. The hind ones appear first because the front limbs are covered by the operculum. The left front limb appears through the spiracle, followed later by the right leg which breaks through the operculum. Lungs have formed by now and the tadpole begins to breathe air at the surface. It now feeds on animal material, such as insect larvae, and the mouth enlarges.

As the legs grow, the tail shortens and the typical frog shape becomes obvious. The frog has now metamorphosed or changed into the adult form. It leaves the water and lives in damp vegetation feeding on insects, slugs, and worms. The whole process of metamorphosis from egg to froglet takes about three months but the small frog requires another three or four years to become mature and able to breed.

Pairing normally takes place in water and the eggs are usually fertilized immediately after spawning. The history of most species follows, in general, that of the common frog. Those species that lay their eggs in damp soil spend the larval period within the egg and hatch as tiny frogs. A few species give birth to active young.

There are several interesting examples of parental care among the toads. The midwife toad, found in southern Europe, pairs on land. The eggs, laid in strings, and then wrapped around the legs of the male toad. For two or three weeks the tadpoles develop within the eggs, and then the male enters the water and sheds the eggs. The tadpoles quickly hatch and develop normally. The Surinam toad of South America is completely aquatic but the tadpoles are not free-swimming. As the eggs are laid they are passed onto the back of the female where they sink into small hollows. Growth of the skin around each hollow forms a lid and a young toad completes its larval life enclosed within each of these pits. When they come out they are tiny replicas of the parents. A few frogs and toads construct nests for their eggs but most of them leave their eggs to the mercy of fish, ducks, and many other animals. Only a small proportion of the eggs ever reach maturity.