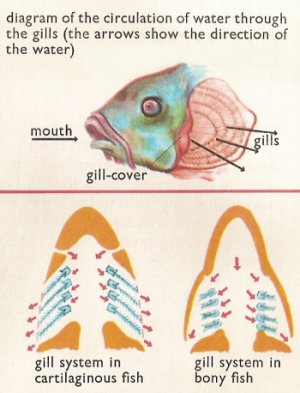 In aquatic animals, a gill is a highly vascularized tissues with large surface area. Gills are outgrowths of the skin, much folded to present a greater surface area through which the exchange of gases with the surrounding water can take place.

In fish, each gill-filament is supported by a bar of bone or cartilage known as the gill-arch. In some fish, such as sardines and herrings, a comb-like inner edge serves to catch the minute organisms which make up the plankton on which the fish feed. The gills lie in chambers placed symmetrically on either side of the body just behind the head. The water, which is made to flow across the gills due to movements of the throat, passes in through the mouth and into the pharynx, then enters the chamber and goes out again with the raising and opening of the gill-cover or operculum. The higher invertebrates, such as crabs and lobsters, have gills protected by an exoskeleton and maintain an adequate oxygen supply by pumping water over them.

In fish with cartilaginous skeletons the gills communicate directly with the outside by means of five or six transverse slits. Fish of this type belong to the class Chondrichthyes, and include the sharks and rays. In many of them the water enters through a pair of small openings just in front of the gills known as spiracles.