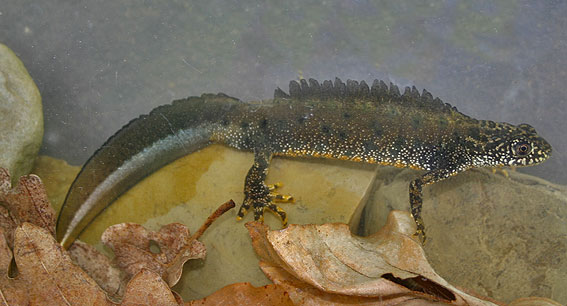 Urodela is an order of amphibians (class Amphibia) that includes the newts and salamander – the tailed amphibians. Urodelans are often brightly colored and vary in length from a few cm to about 1.5 m. Most species, however, are less 0.3 m (1 ft) long.

The eggs are fertilized within the body of the female and before pairing there is usually an elaborate courtship display by the male. Newts of the genus Triturus, found in Europe and North America, as a rule exhibit the typical life history. After winter hibernation, the adults – the males in showy mating colors – enter the water and courtship begins. The male makes use of his coloration and his tail crest and after a while deposits a packet of sperm. This is picked up by the female in her cloaca (the opening of the reproductive and excretory systems) and stored until the eggs are ripe. The eggs are laid singly or in small groups. They are covered with a sticky fluid that quickly swells upon contact with water and serves to attach the eggs to leaves. The female normally covers the eggs by folding the leaves over.

Tadpoles hatch in about two weeks and begin to feed on animal and plant food. At first they are limbless and have external feathery gills and a broad tail fin. As development goes on, legs appear and the tadpole begins to resemble a small adult. Lungs gradually develop and, in the summer, the gills disappear. So, too, does the tail fin. The new has now metamorphosed into the adult stage. The young adult laves the water and may not return for several years – until it is sexually mature. Adult news live in damp places, feeding on slugs, worms, and insects.

The tailed amphibians show many variations on this life history. The European spotted salamander is viviparous (i.e., it gives birth to active young). Pairing takes place on land and the egg s develop within the female. The tadpoles are born when the female enters the water. The black salamander of the Alpine regions has carried the process a step further. The adults do not return to the water at all. The eggs develop, pass through the tadpole stage, and change into tiny adults before leaving the mother's body. The free-living larval stage is thus suppressed. A number of salamanders lay their eggs in damp soil, under stones and similar objects. The tadpole staged is passed within the eggs and miniature adults emerge. The American worm salamander is an example. These last examples show how salamanders have become completely terrestrial, but some some species have gone the other way and are exclusively aquatic.

The aquatic forms often retain larval characteristics, such as external gills, even in the adult stage. Necturus, the mud-puppy, retain the external gills, and has only tiny lungs. In other species, the limbs are not fully developed. The axolotls of Mexico may never acquire the typical adult characters at all: they can reach sexual maturity and between without first metamorphosing.