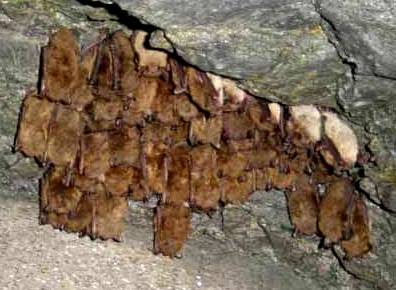 Hibernation is a dormant, sleep-like condition adopted by some animals to survive the harsh conditions of winter. Adaptive mechanisms to avoid starvation and extreme temperatures include reduced body temperature, a slower heartbeat, slower breathing rate, and slower rate of metabolism. Hibernation occurs in many mammals, and most reptiles and amphibians, of temperate and arctic regions. Some hibernating animals, e.g., bats, are able to wake to feed from time to time.

Hibernation is one form of long-term resting state, or dormancy, found in living things when growth stops and the internal processes are slowed down. A similar sort of inactivity to hibernation, called aestivation, is common in some freshwater-living creatures, such as the lungfish, some desert-living animals, and and also snails, earthworms, and some insects, which burrow down into the ground and thereby avoid hot and dry conditions.

In plants, dormancy during adverse conditions is manifest in the lack of growth of perennial plants such as grasses, the loss of foliage by deciduous trees, and the production of underground perennating organs such as bulbs, corms, and tubers.

During the short polar summers, the pools abound with life. Millions of tiny one-celled animals seem to appear from nowhere. In fact, they have passed the long cold winter in tiny, hard-walled cysts. When the cold weather sets in, the animals form the protective coat and remain within it, almost lifeless. The same is true for nematode worms and other small creatures. Their tiny cysts are found in frozen soil, dried ponds, and other highly unfavorable places. They seem quite lifeless, yet when given good conditions they spring to life. The almost lifeless state is called anabiosis (= without life).

Although many aquatic animals remain active below the covering ice, their land-living relatives frequently hibernate. The common garden snail covers the opening of its shell with a slime containing calcium phosphate that hardens into a tough protective covering. So protected, it spends the winter amid rotting vegetation or under a log or stone.

Insects may pass the winter in any of the four life-stages. Probably, the majority over-winter as eggs which are very resistant to cold and to drying. The eggs of many species will not hatch until they have been subjected to a period of cold. This enforced rest is called a diapause and is also found in the grubs and pupae. Even when kept in the warm, the insects will go into a state of inactivity for a while. Hibernating caterpillars may be found among the dead leaves in ditches and hedgerows and the chrysalids (pupae) of many moths can be dug up from the soil. The butterflies that come out with the first spring sunshine have all over-wintered as adults, secure in some outhouse or attic.

Fishes rarely hibernate although some species become lethargic in cold weather and may remain motionless, partly buried in the mud. Lung-fishes, however, aestivate during the dry period when their pools often dry up. They burrow down into the mud and form a resting chamber from which little moisture escapes.

Amphibians and reptiles are well-known hibernators. Frogs, tortoises, snakes, and lizards all bury themselves away from the effect of frost. They often huddle together and this habit undoubtedly helps to keep their temperature a degree or two above that of the surroundings. Some of these animals seem able to expel water from their tissues. This makes the remaining fluids more concentrated and lowers their freezing point. The animals can then endure temperatures below 0°C without becoming frozen solid.

True hibernation is not known among birds although some become drowsy during cold weather. Nightjars are insect-eating birds. European ones migrate to South Africa in winter. However, the whip-poor-will, an American nightjar, has been found to pass the winter in a state of semi-hibernation. The temperature of these sleeping birds is about 65°F instead of the normal 100° of the active bird. Many mammals, too, hide away and remain drowsy during the winter months. Bears, badgers, tree squirrels, and others go to sleep for varying periods of time, but they wake periodically and may feed on stored food. Their temperature does not drop more than a few degrees below normal, however. True hibernation, where the body temperature falls almost to that of the surroundings, is found in only a few groups of mammals. The egg-laying monotremes and some of the opossums are known to hibernate in cold winters. Bats of temperate and cold climates hibernate because they cannot catch insects in winter. Bats are peculiar, however, in that their temperature drops considerably every time they sleep, even in the summertime. In this torpid condition they use less energy and they can be more active when they are awake.

Some insect-eating mammals – notably the hedgehog – and many rodents (e.g., dormice, ground-squirrels, and hamsters) also go into a deep winter sleep. Even so, these hibernators often wake up and may feed on stored food. Ground squirrels certainly do this. It seems that periodic is essential for getting rid of accumulated waste.

Before they go into hibernation, animals often put on weight, in the form of fatty deposits. This extra material is drawn upon during the winter sleep. Others store nuts and other food on which to draw when they wake at intervals. Among the stimuli that contribute to the onset of hibernation are temperature, lack of food, and length of day. Some internal control is also involved because close relatives of hibernating animals often remain active in the cold season.

At the start of hibernation the temperature-regulating mechanism is disturbed and the body temperature falls. The regulating mechanism may fail in response to prolonged cold. A short cold spell will not necessarily lead to hibernation. As the body temperature falls. the other activities slow down. Less oxygen is used, less food material is used, breathing slows down, and the heart-beat rate also slows down. The animal is then in a deep sleep. Its metabolic rate (the rate at which body processes go on) is less than a thirtieth (even as low as a hundredth) of that of the active animal. These changes involve hormones. All the while, however, the nervous system is in control. If the outside temperature drops too much, the heart-rate quickens and the body temperature increases to maintain life.

The end of hibernation is brought about by some stimulus such as the temperature rise in the surroundings and is probably controlled by the nervous system. The body processes increase their rate and shivering often occurs – producing more heat. In the hamster, an hour or two is all that is necessary for the animal to wake and regain its normal temperature. Bats possibly need an even shorter time. During the waking process a great deal of energy is used and so, although a hibernating animal does wake periodically, too frequent disturbances can be fatal. An animal will quickly use up its supplier of fat and, unless it has a store of food on which to draw, it will soon perish.