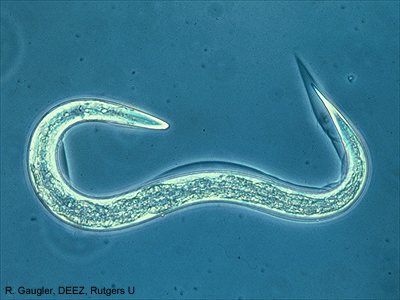 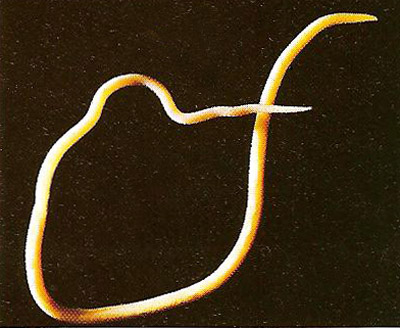 Ascaris lumbracoides inhabits human and pig intestines where it is harmless except in large numbers, when it blocks the gut. The female grows to 30 cm (12 in); the male is shorter. 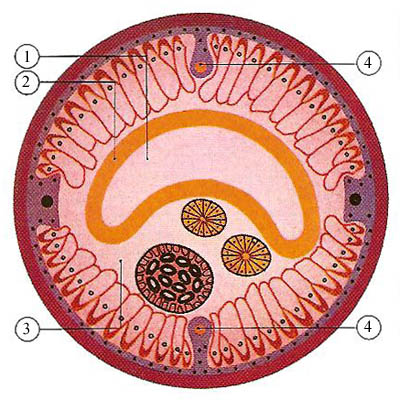 Cross-section of a female Ascaris nematode showing a pseudo-coelom (3), a cavity formed by the coalescence of fluid-filled spaces within the mesoderm. The intestine (1) lacks a muscular coat and only longitudinal muscle bands (2) are present. Nerve cords (4) are in evidence.

A nematode is any of a large group of worms having an unsegmented cylindrical body, tapering at both ends. This distinguishes nematodes (known commonly as roundworms) from other helminths.

The phylum Nematoda is among the largest of the animal phyla. Approximately 28,000 species have been named; however, it has been estimated that if all the species were scientifically described, the number would be closer to one million.

Nematodes occur as free-living forms in the sea, fresh water, and soil, or as parasites of plants, animals, and humans. Hookworms and threadworms infest the gastrointestinal tract. Filariae are found in the lymphatic tissues. The guinea worm and Onchocerca affect connective tissue. Some nematodes (e.g., threadworms) are transmitted from host to host by the ingestion of eggs; others (e.g., Wuchereria) by the bite of a blood-sucking insect.


The life of nematodes

Nearly all vertebrate animals, and some invertebrates, have parasitic nematodes living within them. In humans the intestinal inhabitant Ascaris lumbricoides (see ascariasis) sometimes causes pain and diarrhea, usually in children, while Wuchereria bancrofti, the causative agent of elephantitis. Hookworms, guinea worms, whipworms, and giant kidney worms are all nematodes that cause disease in man. Other nematodes are free-living, but wherever they occur they do so in large numbers. A single handful of soil may contain a million of them.

Adult nematodes are generally spindle-shaped. They have thin, inflexible body walls which restrict their movements to whiplike body contortions. Most possess a simple, tubular digestive tract and a primitive excretory system consisting of an H-shaped arrangement of canals that opens via a pore at the front of the body. The high pressure of body fluids forces excreta into the canals and out of the body. The nervous system is also built on an H-shaped plan and although the system is a simple one, nematodes have sensory structures that respond to touch, chemical, and light stimuli.

In many nematodes, including the human (and animal) parasite Ascaris lumbricoides, the two sexes are separate and males are smaller than the females. Males are equipped with only a single testis, females with a pair of ovaries. During copulation the male injects sperm into the females. The sperm crawl like amoeba toward the eggs and fertilization takes place within the female. The female Ascaris can lay up to 200,000 eggs a day and these are eliminated in the feces of the host. Characteristically, parasitic nematode worms have very complex life cycles, often involving more than one host and several developmental stages.

In hermaphrodite nematodes, where both testis and ovaries are present, sperm are produced first and then stored. As eggs are released stored sperm fertilizes them. In all species fertilization produces a zygote, which becomes enclosed in a protective cyst. Juvenile worms grow inside these cysts but on escaping they pass through as many as four larval stages before becoming adults.