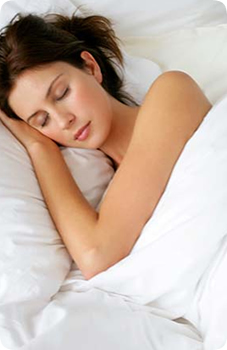 Sleep is a periodic state of relative unconsciousness and inactivity from which a person or animal can be roused. If deprived of sleep humans initially experience hallucinations, acute anxiety, and become highly suggestible and eventually coma and sometimes death result.

During sleep, the body is relaxed and most bodily activity is reduced. Cortical, or higher brain activity, as measured by an electroencephalograph; blood pressure; body temperature; and rate of heart rate and breathing are decreased. However, certain activities, such as gastric and alimentary activity, are increased.

Sleep tends to occur in daily cycles which exhibit up to 5 or 6 periods of orthodox sleep – characterized by its deepness – alternating with periods of paradoxical, or rapid eye movement (REM) sleep, characterized by its restlessness and jerky movements of the eyes. It is during this REM sleep, which occupies about one fifth of total sleeping time, that dreaming occurs. Sleepwalking (somnambulism) occurs only during orthodox sleep and nit when we are dreaming.

Separate sleeping and waking centers in the hypothalamus cooperate with other parts of the brain in controlling sleep. A rested brain and concentration are probably the most effective basis for concentration. Difficulty in sleeping is called insomnia.

Dreams are fantasies, usually visual, experienced during sleep and in certain other situations. About 25% of an adult's sleeping time is characterized by rapid eye movements and brain waves that, registered on an electroencephalograph, resemble those of a person awake (EEG). This REM-EEG state occurs in a number of short periods during sleep, each lasting a number of minutes, the first coming some 90 min after sleep starts an the remainder occurring at intervals of roughly 90 min. It would appear that it is during these periods that dreams take place, since people woken during a REM-EEG period will report and recall visual dreams in 80% of cases; people woken at other times report dreams only about 40% of the time, and of far less visual vividness. Observation of similar states in animals suggests that at least all mammals experience dreams. Dreams can also occur, though in a limited way, while falling asleep (hypnogogic) or waking (hypnopompic); the origin of these is not known.

Dream interpretation seems as old as recorded history. Until the mid-19th century dreams were regarded as supernatural, often prophetic; their possible prophetic nature has been examined in this century by, among others J. W. Dunne. According to Sigmund Freud, dreams have a latent content (the fulfillment of an individual's particular unconscious wish) which is converted by dreamwork into manifest content (the dream as experienced). In these terms, interpretation reverses the dreamwork process.

Rapid eye movement is a phenomenon observed in sleeping people. REM has been calculated to take up to 20% of a normal night's sleep and has been associated with the time spent dreaming. The sleeper passes in and out of REM sleep and, although it is possible to make do with very little sleep, he or she suffers if deprived of REM sleep.