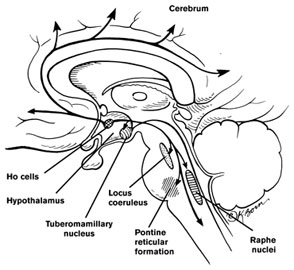 Hypocretin is manufactured by cells in the hypothalamus, which helps control sleep. Most people who suffer narcolepsy have lost these cells, possibly because of an abnormal immune response. Illustration by Kathryn Born.

Narcolepsy is a disorder that causes a person to have difficulty staying awake. Narcolepsy can cause a person to suddenly fall asleep during the day. These "sleep attacks" occur even after getting enough sleep at night. The unusual sleep pattern that people with narcolepsy have can affect their schooling, work, and social life.

The two main types of sleep are rapid eye movement (REM) sleep and non-rapid eye movement (NREM) sleep. During REM sleep, your eyes move rapidly even though your eyelids stay shut. Dreaming mainly happens during REM sleep, when your body becomes limp and you are unable to move your muscles. This temporary inability to move prevents you from acting out any dreams that you may be having.

People with narcolepsy often fall asleep without warning at inappropriate times. Sleep attacks don't just happen during quiet times, such as when reading or watching TV. These attacks can occur during driving, eating, or other activities and can cause:

There is no cure yet for narcolepsy. This lifelong condition can be disabling if left untreated. But medicines and lifestyle changes can improve the symptoms of narcolepsy so that it is easier to live with.

Research suggests that the cause of narcolepsy is a lack of the chemical in the brain called hypocretin. This chemical stimulates brain cells and helps promote wakefulness. It is not known why hypocretin is missing in people who have narcolepsy. Some factors that may work together to cause a lack of hypocretin include:

One out of 10 people with narcolepsy and cataplexy has a close relative with the same symptoms. This suggests that some people may inherit the tendency to develop narcolepsy.

Narcolepsy may affect 150,000 (1 in 2,000) people or more in the United States. It usually first occurs between the ages of 15 and 30 and affects both men and women. The symptoms can start suddenly or appear gradually. The condition is difficult to diagnose without medical tests. Often people live with mild symptoms, such as daytime sleepiness and muscle weakness, for several years before narcolepsy is diagnosed. Narcolepsy can also develop later in life or in children, but it is rare before age 5. Factors that may increase the risk of developing narcolepsy include having:

The major symptom of narcolepsy is excessive daytime sleepiness with sleep attacks. People with narcolepsy may also have one or more of the following signs and symptoms:

All people with narcolepsy have excessive daytime sleepiness. This is usually the first symptom of the condition. They also may have sudden, irresistible urges to sleep during the day (sleep attacks). They usually fall asleep for just a few seconds or minutes. Rarely, they may fall asleep for as long as an hour or more. Daytime sleepiness can cause:

Nearly 3 out of 4 people with narcolepsy (75 percent) experience sudden muscle weakness while they are awake. This is called cataplexy, and it is similar to the paralysis that occurs during dream sleep. Mild attacks of muscle weakness can cause:

Severe attacks of narcolepsy may cause complete paralysis and falls. Attacks often last less than 2 minutes, and they may only last a few seconds. During both mild and severe attacks, the person stays fully conscious.

The sudden attacks of muscle weakness in narcolepsy can happen at any time. But these attacks are often triggered by strong emotions, including:

Attacks of muscle weakness and tone are sometimes the first symptom of narcolepsy that is noticed. But usually this symptom occurs weeks or months after people who have narcolepsy first start to experience excessive sleepiness during the day.

Doctors will base a diagnosis of narcolepsy on the patient's symptoms, family history of narcolepsy, physical exam, and test results. The symptoms people have are often distinct enough for doctors to diagnose narcolepsy. But laboratory tests are needed to confirm the diagnosis and determine the best treatment. These tests may require the patient to visit a sleep disorders center for an overnight evaluation.

If your doctor suspects you have narcolepsy, he or she will ask whether you have:

If you have any of these symptoms, your doctor will want to know when you first developed them and if they interfere with sleep or daily activities. The doctor may also ask questions about your sleep habits and how you feel and act during the daytime. To help you answer those questions, you may be asked to keep a sleep diary for a few weeks. In this daily dairy you may be asked to write:

Doctors also usually ask whether you have symptoms of other sleep disorders that cause daytime sleepiness. You may also be asked if you have any relatives with narcolepsy.

Your doctor will examine you to see if you have signs of other possible causes for your symptoms. These causes include:

This part of the diagnosis usually requires your doctor to do a complete physical exam.

Narcolepsy is easier to diagnose if you have more symptoms than just daytime sleepiness and sleep attacks.

Sleep tests are usually done at a sleep disorders center. For some sleep tests, you may need to sleep overnight at the center. Other sleep tests can be done during the day. The three tests most often used to diagnose narcolepsy are:

For this study, you sleep overnight at a sleep center. While you are sleeping, the staff at the center use various devices to measure your brain activity, breathing, and movements. The signs of narcolepsy this test can reveal include:

This test is usually done during the day after an overnight PSG. Also called a nap study, the MSLT measures how easy it is for you to fall asleep during the day. You are asked to take short naps about every 2 hours. The test records eye movements, muscle tone, and brain activity with small devices attached to the head. The signs of narcolepsy this test can reveal are quickly falling asleep during the day (after a full night's sleep) and entering REM sleep soon after falling asleep.

There is no cure for narcolepsy, but many of the symptoms of this disorder can be relieved with medicines and lifestyle changes. Treatment for narcolepsy is based on the type and severity of symptoms. Some medicines help relieve daytime sleepiness, while other medicines may help prevent the sudden loss of muscle tone and movement (cataplexy) or vivid dreams while falling asleep or waking up (hallucinations) that some people with narcolepsy have. Not all medicines work for everyone. It may take weeks to months for your doctor to find the best treatment for you.

Doctors may prescribe stimulants to increase daytime alertness in narcolepsy patients, including:


Medicines to relieve other symptoms

Several different antidepressant medicines can be used to treat the sudden loss of muscle tone (cataplexy), vivid dreams while falling asleep and waking up (hallucinations), and inability to move or speak when falling asleep or waking up (sleep paralysis) that affect some people with narcolepsy. These medicines affect the chemicals in the brain that seem to play a role in narcolepsy. People with cataplexy need to check with their doctor to find which treatment will work best for them.

If you have narcolepsy, it is important to combine any drug treatments with lifestyle changes that help lessen symptoms. By taking regular naps at times during the day when you are feeling the sleepiest, you may need less medicine to treat daytime sleepiness. You should also try to go to sleep and wake up at the same time each day, and give yourself at least 8 hours to sleep each night. To make it easier to fall asleep at night, you can:

A few hours before bedtime, you should also try to avoid substances that can make it hard to fall or stay asleep. These substances include:

Narcolepsy is a lifelong condition. Although there is no cure for this condition, symptoms often improve with ongoing treatment. Most people with narcolepsy can live near-normal lives. The condition can be dangerous if sleep attacks or sudden loss of muscle tone occur while driving or using machinery. Even when these episodes occur at other times, they can cause injury or impair performance in school and on the job. To help avoid harm, try to:

Driving can be dangerous for people with narcolepsy. You need to take special care to help prevent crashes:

People with narcolepsy can work in almost all types of jobs. It may be best if you have a flexible work schedule so you can take naps when needed. It also helps to have a job where you interact with your coworkers. Try to avoid jobs that require you to drive or have long commutes to work.

Employers with more than 50 workers are also covered by the Family and Medical Leave Act. This law allows preapproved leave without pay to care for yourself or a family member with narcolepsy. The Social Security Disability Insurance or Supplemental Security Income programs may also help you if you cannot work due to your narcolepsy.

Sudden sleep attacks or loss of muscle tone can be embarrassing. This can make you avoid getting together with friends, schoolmates, or fellow workers, and it can cause low self-esteem. People with narcolepsy may also feel they have no control over their behavior and may become depressed. To get emotional support for narcolepsy, you can:

Narcolepsy symptoms can affect learning by limiting children's ability to study, focus, and remember. Children with narcolepsy are sometimes mistakenly thought to have a learning disability or a seizure disorder (epilepsy). When tired, some children with narcolepsy tend to speed up their activities, rather than slow down. These children can be mistakenly labeled as hyperactive.

You might want to tell your child's teachers and school administrators about the child's narcolepsy. It is also helpful to tell the school nurse about the condition and the medicines your child takes for it. Together you can work out a place to keep the medicines and a schedule for taking them at school. You also might want to check with student services about special education and other services, if needed, to help your child with narcolepsy.

If you have narcolepsy and are pregnant or considering getting pregnant, you should talk to your doctor about the effect your narcolepsy medicine can have on the baby before and after delivery. You also might want to discuss with your doctor your chances of having a child with narcolepsy.