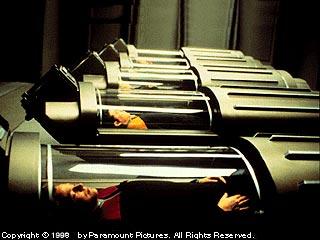 Suspended animation is a technique, popular in science fiction, and familiar through films such as 2001: A Space Odyssey and Alien, in which astronauts are placed in a state of deep hibernation for long-duration spaceflights in so-called sleeper ships. Another example is in the original Star Trek series episode "Space Seed".

Suspended animation might enable the crew of a relatively slowing-moving spacecraft to survive the entire duration of a long interplanetary or interstellar voyage, and thus avoid the need for an enormous generation ship; occasionally the two concepts have been combined, with generations of "caretakers" supervising a large population of frozen passengers.

In the late 1960s to early 1970s, NASA ran a program to investigate "depressed metabolism" but abandoned it when it was clear that the technology was not available to make it feasible. Progress may be made by further observation of mammals, such as bears, that go into a deep slumber while still maintaining a sufficient level of metabolism to keep their kidneys from shutting down. More primitive creatures, including tardigrades, which display the extraordinary condition of cryptobiosis (where metabolism all but stops), may also have something to teach us. But whether techniques such as cryonics, which seeks to freeze individuals for later revival, will ever be usefully applied in space travel remains to be seen.