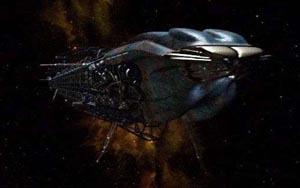 The Varro generation ship in Star Trek VOY: "The Disease".

A generation ship is an immense, relatively slow-moving spacecraft, also known as an interstellar ark, aboard which many generations would live and die on a voyage between stars. The generation ship has been offered as an alternative to spacecraft that travel at much higher speeds carrying conventional-sized crews. The idea of a vessel carrying a civilization from a dying solar system toward another star for a new beginning was envisioned in 1918 by Robert Goddard. But, perhaps concerned about professional criticism, he placed his manuscript in a sealed envelope and it didn't appear in print for over half a century. Konstantin Tsiolkovsky and J. D. Bernal wrote about artificial planets and self-contained worlds in the 1920s, as did Olaf Stapledon in his visionary novels, and by the 1940s the generation ship concept had been fully expanded by science fiction writers in the publications of Hugo Gernsback and others. Perhaps the earliest example of a true generation ship appears in Don Wilcox's "The Voyage That Lasted 600 Years" (1940). Robert Heinlein, in Orphans of the Sky (1958), first published in 1941 as a serial in two parts, "Universe" and "Common Sense", raised the possibility that the crew of such a vessel might eventually forget they were aboard a ship and believe instead that they were the inhabitants of a small world – a theme taken up in one of the original Star Trek episodes: "For the World is Hollow and I Have Touched the Sky." Another generation ship appears in the Star Trek: Voyager episode "The Disease".

In 1952 L. R. Shepherd examined the idea of the generation ship in more technical detail and described a nuclear-propelled million-ton interstellar vessel shaped as an oblate spheroid, which he called a "Noah's Ark". Such a ship would be a microcosm of human civilization with a substantial and highly varied population, extensive educational, recreational and medical facilities, food production areas, research laboratories and so forth – effectively, a miniature, nomadic planet. There is perhaps a strange attraction in the idea, though whether anyone would willingly volunteer to exile themselves to such an environment knowing that they would die some fraction of the way to the ultimate goal is hard to say. Perhaps there would be less of a psychological problem for subsequent generations who were born aboard the ship and therefore never knew what life was like on the surface of a planet under open skies. Then, again, how difficult would it be for those who finally reached journey's end to step outside the confines of their artificial world? Like many other old ideas in space travel, including Lucian's waterspout and Well's cavorite, the generation ship now seems quaint and romantic. Almost certainly, interstellar travel will never be accomplished by this means though it is still possible that the related concept of the space colony will come to fruition.

The AAAS held a session on interstellar travel in 2002 where the anthropologist John Moore estimated that a population of 150–180 was just big enough to allow normal reproduction for 60-80 generations.