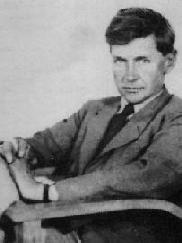 Olaf Stapledon was an English philosopher and novelist whose ground-breaking ideas, not least concerning the anatomical, mental, and moral diversity that might exist among intelligent extraterrestrials, served as a fertile source of inspiration for many subsequent science fiction writers. After earning degrees in history from Oxford and philosophy from Liverpool College, Stapledon spent most of his life near Liverpool.

His first novel, Last and First Men1 (1930) spans 2 billion years of human history, but is eclipsed in scope and style by Star Maker2 (1937). Although in these works, alien creatures play a secondary role to the philosophical, political, and religious themes which Stapledon explores, the sheer imaginative power brought to bear in conjuring up, page after page, innovative other-worldly beings has never been surpassed. Almost as the Greek philosophers did, Stapledon seems to touch upon every conceivable possibility, up to and including a single, cosmos-wide entity, so that future writers can only play with variations upon the same ideas. Among those to be most directly influenced by his breadth of vision were his compatriots, C. S. Lewis and Arthur C. Clarke.