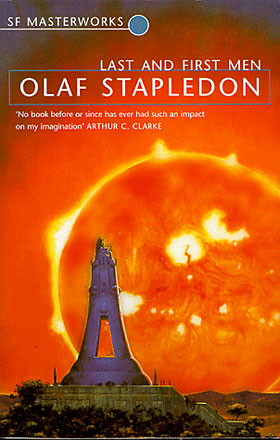 Last and First Men was Olaf Stapledon's first novel (1930). It tells the story of 18 species of mankind, some naturally evolved, others the product of eugenics, across a time span of 2 billion years.1 Only with the Second Men, some 10 million years in the future, does humanity first meet extraterrestrial intelligence, in the form, adopted by Wells 33 years earlier, of invaders from a drought-stricken Lowellian Mars. Stapledon's Martians, however, are of an entirely different ilk from the repulsive creatures in The War of the Worlds. "Maintaining vital organization as a single conscious individual without continuity of living matter", they are evidently noncorporeal life-forms of the type often encountered in the science fiction of later decades. So different indeed are the Martian incursors from any terrestrial-type organisms, that at first they are not even recognized as intelligence – another possibility that would exercise the imaginations of those to come (see extraterrestrial intelligence, more advanced than us).

Later in Stapledon's saga, the descendants of the human race relocate to Venus where they find a watery world straight out of the writings of Arrhenius (see Venus, life), inhabited by marine intelligence and other creatures "some sessile, others free-swimming, some microscopic, others as large as whales." All of these indigenous creatures are wiped out in the terraforming process employed to make the second planet fit for human habitation. Finally, mankind abandons Venus for Neptune before a supernova threatens its very existence. Here Stapledon again borrows from Arrhenius, suggesting that humanity's last hope of survival is panspermia – to send copies of its cells to the stars in the hope that there they will regenerate.

Arthur C. Clarke recalled in later years: "With its multimillion-year vistas, and its role call of great but doomed civilizations, the book produced an overwhelming impact upon me."

Although aliens feature only sparingly in Last and First Men, some of the forms they are said to assume in other parts of the Universe are spectacularly non-geomorphic:

In our own galaxy there have occurred hitherto some twenty thousand worlds that have conceived life. And of these a few score have attained or surpassed the mentality of the First Men... [Beyond planets] we have evidence that in a few of the younger stars there is life, and even intelligence. How it persists in an incandescent environment we know not, nor whether it is perhaps the life of the star as a whole, as a single organism, or the life of many flame-like inhabitants of the star ...

Such strange possibilities were to be explored much further in Stapledon's next and greatest work, Star Maker.