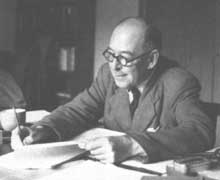 C. S. Lewis was a literature professor at Oxford from 1925 and Professor of Medieval and Renaissance Literature at Cambridge University after 1954 who wrote extensively as a Christian apologist. His cosmic trilogy, Out of the Silent Planet1 (1938), Perelandra2 (1943), and That Hideous Strength3 (1945), explores the idea, popular among Catholic authorities during the early decades of the 20th century, that the assumption of multiple inhabited worlds is compatible with Christian doctrine and that beings on other planets might be in a variety of different spiritual states. Some worlds, accordingly, might be in an Eden-like state of grace, others "fallen", redeemed, or in a condition of "integral nature" midway between man and angel. Some might even be so evil that they were beyond redemption. This was essentially an updated and expanded version of the idea proposed by some Medieval Christian Aristotelians that the heavenly regions between the Moon and the primum mobile might be occupied by angelic intelligences. In Lewis's vision, Mars ("Malacandra") has yet to experience the Fall of humankind, Venus ("Perelandra") has seen it averted, while Earth ("Thulcandra") is isolated by divine decree.

Stapledon's descriptions of Mars and Venus, in Last and First Men, are recognizable, but it was David Lindsay's Voyage to Arcturus that influenced Lewis most significantly. "From Lindsay," he wrote, "I first learned what other planets in fiction are really good for; for spiritual adventures." Although his primary purpose was to defend Christian beliefs in the context of pluralism, however, Lewis also managed to populate his trilogy with a biologically-interesting array of aliens, ranging from the froglike pfifltriggi to the etherial eldil, with bodies made of light. Doubtless this contributed to the mounting public interest in extraterrestrial life at a time when astronomers, following the exposure of weaknesses in the catastrophic hypothesis, were beginning to believe again that planetary systems might be common.