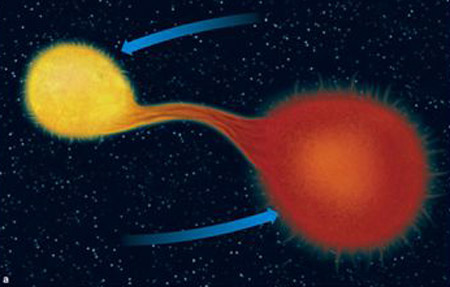 One version of the catastrophic hypothesis: a near collision between the Sun and another star.

The catastrophic hypothesis is the now-defunct idea that the planets and smaller bodies of the solar system originated in a violent event involving a collision or near-collision between the Sun and another object. On and off, it played an important role in the extraterrestrial life debate from the second half of the eighteenth century to the first half of the twentieth century, since it implied that extrasolar planets might be very scarce.

The earliest version of it was the cometary collision hypothesis of Buffon (1749), but this was largely ignored in favor of the nebular hypothesis, proposed by Kant and Laplace. Theoretical difficulties with the nebular hypothesis, however, led to various revivals of the catastrophic hypothesis. The first of these was due to Bickerton in 1880. Realizing that nothing less than a stellar-sized intruder could have dislodged substantial amounts of solar matter, Bickerton proposed that the Sun had suffered a grazing impact with another star. This had drawn out a tongue of hot gas from which the planets subsequently coalesced. He suggested that so-called "spiral nebulae" (now known to be external galaxies) were products of similar encounters. However, Bickerton's scheme could not explain the large amount of angular momentum possessed by the giant outer planets.

Further technical difficulties with the nebular hypothesis, at the turn of the 20th century, prompted other suggestions involving stellar encounters. The Chamberlin-Moulton planetesimal hypothesis appealed to a remote passage of a second star, while the Jeans-Jeffreys tidal hypothesis involved a close passage or (in the version due to Jeffreys) a grazing collision. Throughout the 1920s and 1930s, it was widely accepted that some version of the catastrophic hypothesis held the key to the origin of the Solar System and, consequently, because close stellar encounters must be very infrequent, that life in the Universe was exceptional. But then fatal cracks began to appear in this scenario. In 1939, Lyman Spitzer argued that hot gas sucked out of the Sun would dissipate into a thin cloud rather than condense to form solid planets. In 1943, Henry Russell pointed out that if material had been wrenched out of the Sun with sufficient momentum to explain the large amount of angular momentum possessed by planets such as Jupiter, this material would not have gone into orbit but would have escaped from the Sun's gravitational pull altogether. To address this objection, it was proposed that, before the planets were formed, the Sun may have been a component of a binary star system. If the encounter with a third passing star occurred with the companion star already moving at the distance of the giant planets, any material removed from it would have had the necessary angular momentum from the outset. It was easy to show that such an encounter could also cause the companion to escape from the Sun forever. Later variants on this binary star theme included Fred Hoyle's suggestion that the Sun's companion may have exploded as a supernova, throwing out debris from which the planets were made. All such ideas, however, have now been superceded by an updated version of the nebular hypothesis.