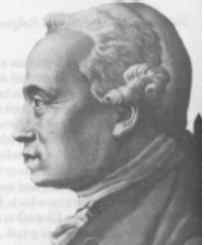 Immanuel Kant was a great German philosopher who was born and lived in Königsberg (Kaliningrad). The starting point for Kant's "critical" philosophy was the work of David Hume, who awakened Kant from his "dogmatic slumber" and led him to make the "Copernican revolution in philosophy." this consisted of the radical view found in Critique of Pure Reason (1781) that objective reality (the phenomenal world) can be known only because the mind imposes the forms of its own intuitions – time and space – upon it. Things that cannot be perceived in experience (noumena) cannot be known, but as Kant confesses in Critique of Practical Reason (1788) their existence must be presumed in order to provide for man's free will. In his third major work Critique of Judgment (1790) he makes aesthetic and teleological judgments serve to mediate between the sensible and intelligible worlds which he divided sharply into the first two Critiques.

Kant played an important part in the extraterrestrial life debate (see pluralism) of the 18th century and in enlarging humankind's conception of the physical universe. The young Kant was strongly influenced by Thomas Wright's speculations about life on other worlds and on the nature of the Milky Way. By 1755, in his Universal Natural History and Theory of the Heavens, he set out his revolutionary claims that the Milky Way was an optical effect due to our location within a large disk of stars, and that the fuzzy patches known as nebulas were, in reality, other Milky Ways (external galaxies). He also put forward an early version of the nebular hypothesis (later developed by Laplace), though he applied this generally, to the Milky Way and to the universe as a whole, not just to planetary systems.

On more metaphysical matters, Kant took the proponents of natural theology to task for seeking evidence of God's design in every detail of the cosmos. For him, the best evidence for God was the underlying lawfulness of the universe: "There is a God precisely because nature can proceed even in chaos in no other way than regularly and orderly."

His speculations, in Universal Natural History, regarding extraterrestrials are extraordinary. In the cosmology that he develops, not only the solar system and the Milky Way have their centers, but so too does the entire universe. Moreover, the creatures of worlds near to the centers of any system, having developed (he supposed) from less-refined matter, are intellectually feeble, whereas farther out are "the more perfect classes of rational beings." Thus Kant envisaged a hierarchy of intelligent life forms developing throughout time and space. In our own solar system, he considered the inhabitants of Mercury and Venus to be dull, and humans to be on "exactly the middle rung", while the Jovians and Saturnians are beings far in advance of ourselves. As to the problem of reconciling his views on pluralism with Christianity (especially the issues of incarnation and redemption), he speculates that the inhabitants of the outer planets might be "too noble and wise" to sin, whereas the miserable creatures living on Mercury and Venus were perhaps "grafted too fast to matter ... to carry the responsibility of their actions before the judgment seat of justice?" Later in life, he moderated his views on extraterrestrial life without giving up his pluralist stance altogether. In his monumental Critique on Pure Reason (1781), he remarks: "I should not hesitate to stake all on the truth of the proposition ... that, at least, some one of the planets, which we see, is inhabited." However, elsewhere in the same book, he acknowledges that all comments on extraterrestrial life are "a matter of opinion."

An approach to moral questions deriving from the teachings of Kant. It is characterized by an emphasis on the moral autonomy of the individual, the role of reason (rather than personal wants or feelings) in making moral judgments, and the absolute nature of duty. Kantian ethics explicitly denies consequentialism; acts are to be judged by their accordance with universal principles rather than their good or bad consequences. Although modern medical ethics are largely consequentialist, the Kantian tradition has also been influential, not least in its insistence that every human life must be treated as an end in itself and not simply as a means.