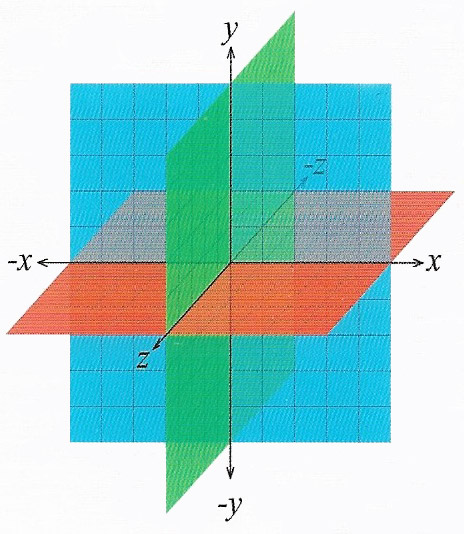 A diagram of three-dimensional Euclidean space. Every point is determined by three coordinates, relating to the point's position on each axis relative to the other two.

According to the treatise Timaeus (c. 360 BC) by Plato, space is a receptacle into which all things come into being. It exists externally, and is not sensed per se but is intuited by "a kind of bastard reasoning." However, our conventional understanding of space, as an extension in three dimensions, comes from the Greek mathematician Euclid (fl. c. 300BC), who wrote a generation after Plato. With the much later addition of "Cartesian coordinates" (the system that locates a point in space using a set of three numbers), Euclid's conception of space provides the framework for the application of algebra and calculus to classical physics.

The German philosopher Immanuel Kant (1724–1804) suggested that space is one of two "a priori conditions of the understanding." That is to say that understanding, and thinking in general, presupposes the existence of space, which, along with time, makes all other concepts and proposition possible. Logical propositions are sequential, and those sequences "unfold" in space. For this reason, space cannot be a projection of the mind: instead, it transcends all cognitive activity and makes thinking possible.

In the 20th century Albert Einstein introduced further conceptually challenging and powerful innovations to our understanding of space. His theory of special relativity couples space with time to show that energy exerted in travel through space inversely affects a person's passage through time (and vice versa). Although a human might feel this effect only during extreme exertions of energy (during travel or at or near speed of light), the effect can be quantified and measured with sophisticated mechanical devices. General relativity, on the other hand, suggests that space possesses shape and that the shape of space is dictated by the presence of mass.

"Space isn't remote at all. It's only an hour's drive away if your car could go straight upwards."
– Fred Hoyle.

In astronomy, space is the part of the Universe lying outside of the limits of Earth's atmosphere. More generally,it is the volume in which all spatial bodies move.

In physics, space is the three-dimensional theater in which things as we know them can exist or in which events can take place. In the Einsteinian worldview, space and time are united inextricably in a spacetime continuum and there is also the possibility of higher dimensions. See also fourth dimension.

In mathematics, a space is any unbounded or bounded extent. According to Euclidean geometry, space is uniform and infinite, so that we may talk of a line of infinite extent or a polygon of infinite area. In Riemannian geometry, however, all lines are of less than a certain, finite extent; and in Lobachevskian geometry, there is a similar maximum area.

There are additionally many other types of space, most of them too abstract to imagine or to describe accurately in a few sentences. Generally, a mathematical space is a set of points with additional features. In a topological space every point has a collection of neighborhoods to which it belongs. In an affine space (see affine geometry), which is a generalization of the familiar concepts of a straight line, a plane, and ordinary three-dimensional space, a defining feature is the ability to fix a point and a set of coordinate axes through it so that every point in the space can be represented as a "tuple," or ordered set, of coordinates. Other examples of mathematical spaces include vector space, measure spaces, and metric spaces.