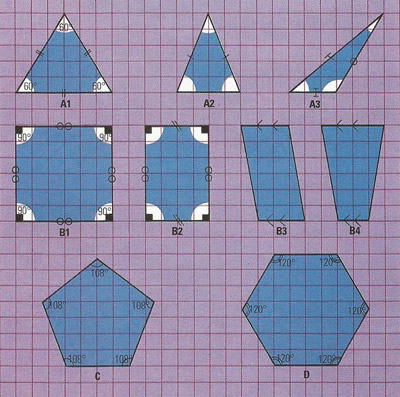 Fig 1. Polygons are many-sided plane figures, the sides and angles of which may be equal or unequal, giving symmetrical or asymmetrical shapes. The simplest figure is the equilateral triangle (A1) which has all sides and angles equal. The isosceles triangle (A2) has two sides equal while (A3), which happens to be obtuse, has sides of differing length. The simplest quadrilateral (B1) is the square with equal sides and equal internal angles. The rectangle (B2) has two pairs of equal and opposite sides with equal internal angles. The parallelogram (B3) has two pairs of equal and opposite parallel sides. The trapezium (B4) has only two parallel sides. The regular pentagon (C) has five equal sides and the regular hexagon (D), six. 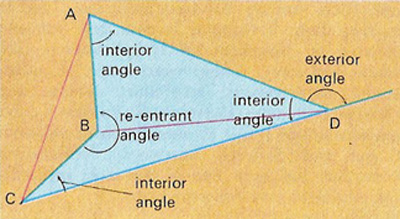 Fig 2. The polygon ABCD is an irregular quadrilateral with acute angles at A, C, and D and a reentrant angle at B. AC and BD are its diagonals. 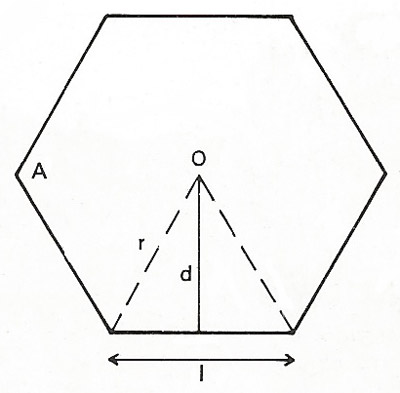 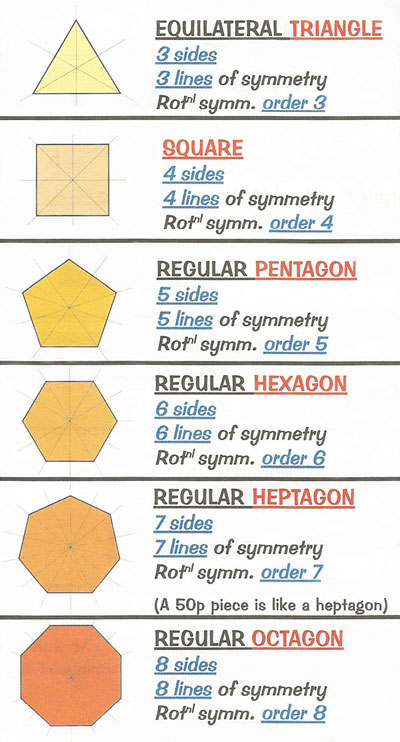 A polygon is a plane closed figure whose sides are straight lines. The term polygon (from the Greek poly for 'many' and gwnos for 'angle') sometimes also refers to the interior of the polygon (the open area that this path encloses) or to the union of both.

An n-gon is a polygon with n sides. For example, a hexagon is a 6-gon.

A self-intersecting polygon is a polygon with edges that cross other edges.

A pentagon is a five-sided polygon; its interior angles add up to 540° and are each 108° in the case of a regular polygon.

A hexagon is a six-sided polygon.

An octagon is an 8-sided polygon. The sum of the interior angles of an octagon is 1080 degrees. A regular octagon – one in which all the sides and all the angles are equal – is constructible with a compass and straightedge.

A decagon is a polygon with 10 sides. Each interior angle of a regular decagon is 144°.

A cyclic polygon is a polygon with vertices that all lie on the same circle. All triangles are cyclic (but not all of any other kind of polygon) because any set of three points, not lying on a single line, can have a circle drawn through it.

The vertex figure is the polygon that appears if a polyhedron is truncated at a vertex. The vertex figure of a cube, for example, is an equilateral triangle. To ensure consistency, the truncation may be done at the midpoints of the edges.