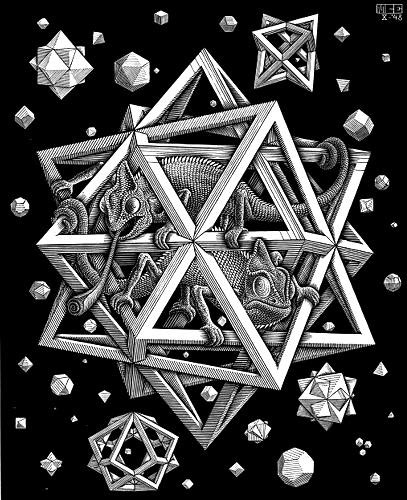 A polyhedron is a three-dimensional object, or a closed portion of space, bounded on all sides by polygons (plane surfaces) and whose edges are shared by exactly two polygons. 'Polyhedron' comes from the Greek poly for 'many' and -hedron meaning 'base', 'seat', or 'face'.

Every polyhedron in three-dimensional space consists of (two-dimensional) faces, (one-dimensional) edges, and (zero-dimensional) vertices. Sometimes the term 'polyhedron' is used to apply to figures in more than three dimensions; however, analogs of polyhedra in the fourth dimension or higher are also referred to as polytopes.

The oldest known examples of human-made polyhedra were found on the islands of northeastern Scotland and date back to Neolithic times, between 2000 and 3000 BC. These stone figures are about two inches in diameter and many are carved into rounded forms of regular polyhedra. Examples including cubical, tetrahedral, octahedral, and dodecahedral forms, one which is the dual of the pentagonal prism, are on display in the Museum of Scotland and in Oxford's Ashmolean Museum.

A compound polyhedron is an assemblage of two or more polyhedra, usually interpenetrating and having a common center. There are two types: a combination of a solid with its dual and an interpenetrating set of several copies of the same polyhedron. The simplest example of a compound polyhedron is the compound of two tetrahedra, known as the stella octangula and first described by Johannes Kepler. This shape is unique in that it falls under both of the above classes, because the tetrahedron is the only self-dual uniform polyhedron; the edges of the two tetrahedra form the diagonals of the faces of a cube in which the stella octangula can be inscribed. Another example of a compound follows from an important Platonic relationship: a cube can be inscribed within a dodecahedron. There are five different positions for a cube within a dodecahedron; superimposing all five gives the compound known as the rhombic triacontahedron.

Polyhedra, like polygons, may be convex or non-convex. If a line that connects any two points on the surface of a polyhedron is completely inside or on the polyhedron, the figure is convex. Otherwise, it is non-convex or concave.

A self-intersecting polyhedron is a polyhedron with faces that cross other faces.

A nonconvex uniform polyhedron is a uniform polyhedron of a type obtained by relaxing the conditions used to produce the Archimedean solids (which have regular convex faces and identical convex vertices) to allow both nonconvex faces and vertex types, as in the case of the Kepler-Poinset solids. The condition that every vertex must be identical, but the faces need not be, gives rise to 53 nonconvex uniform polyhedra. An example is the great truncated dodecahedron, obtained by truncating the corners of the great dodecahedron at a depth which gives regular decagons.

Also, if A denotes the number of angles of a polyhedron, then: