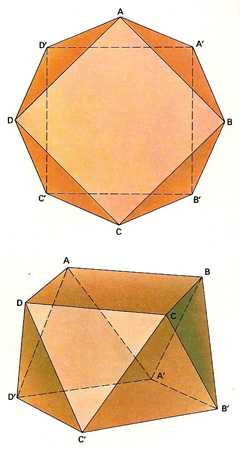 An antiprism with congruent square bases, shown from above and from the side. The sides are congruent isosceles triangles. 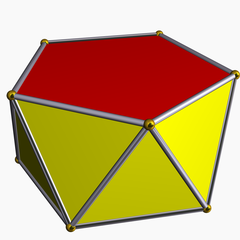 An antiprism is a semiregular polyhedron constructed from two n-sided polygons and 2n triangles.

An antiprism is like a prism in that it contains two copies of any chosen regular polygon, but is unlike a prism in that one of the copies is given a slight twist relative to the other. The polygons are connected by a band of triangles pointing alternately up and down. At each vertex, three triangles and one of the chosen polygons meet. By spacing the two polygons at the proper distance, all the triangles become equilateral.

Antiprisms are named square antiprisms, pentagonal antiprisms, and so on. The simplest, the triangular antiprism, is better known as the octahedron.