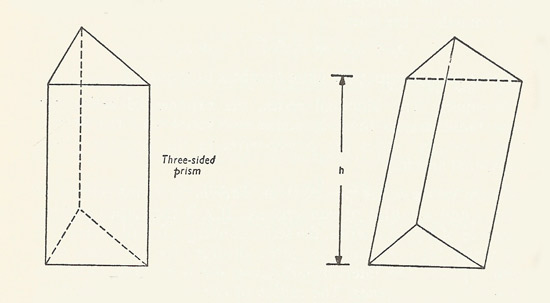 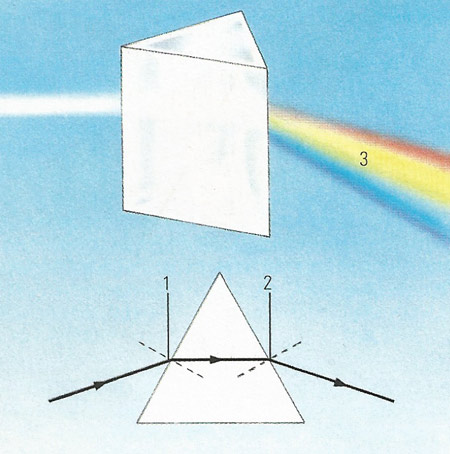 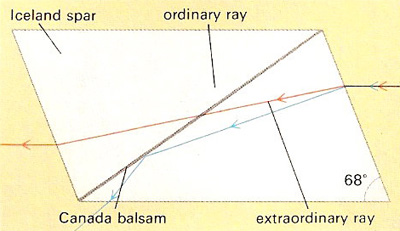 Fig 3. Schematic section through a Nicol prism. The original calcite rhombohedron is split along a diagonal plane, cemented back together again with Canada balsam, and then ground down to the desired shape. Optical polarimeters employ pairs of Nicol prisms.

In mathematics, a prism is a polyhedron constructed from two congruent n-sided polygons and n parallelograms. The word 'prism' comes from the Greek prizma, which relates to cutting or sawing. A prism is a semiregular polyhedron if all of its faces are regular polygons. If the lateral surfaces of the prism are perpendicular to the base, it is said to be a right prism; otherwise, it is known as a oblique prism (see Figure 1).

If the base of a prism is a regular n-agon, it is said to be a regular n-sided prism. The distance between the base and the upper surface is called the altitude. The volume of a prism with base-area B and altitude h is V = B.h.

A prismoid resembles a prism but has bases that are similar rather than congruent, and sides that are trapezoids rather than parallelograms. An example of a prismoid is the frustum of a pyramid. A prismatoid is a polyhedron with all its vertices lying in two parallel planes.

In physics, prismatic pieces of transparent materials are much used in optical instruments. In spectroscopes and devices for producing monochromatic light, prisms are used to produce dispersion effects, just as Newton first used a triangular prism to reveal that sunlight could be split up to give a spectrum of colors (Fig 2). In binoculars and single-lens reflex cameras reflecting prisms (employing total internal reflection) are used in preference to ordinary mirrors. The Nicol prism is used to produce polarized light.

A Nicol prism is an optical device for producing a beam of plane polarized light (Fig 3). Two pieces of calcite crystal are cemented together with Canada balsam. Incident light is split into ordinary and extraordinary linearly polarized rays in the prism. The ordinary ray hits the balsam layer obliquely, and is totally internally reflected; the other ray emerges plane polarized for a certain range of incident angles.

The Nicol prism was invented by the British physicist William Nicol (1768–1851). It is used in the polarizing microscope, and also in geology to examine thin sections of rock microscopically.

A Rochon prism is an optical device consisting of two quartz prisms; the first, cut parallel to the optic axis, receives the light; the second, with the optic axis at right angles, transmits the ordinary ray without deviation but the extraordinary ray is deflected and can be absorbed by a screen. A Rochon prism can be used to produce plane-polarized light and it can also be used with ultraviolet light.