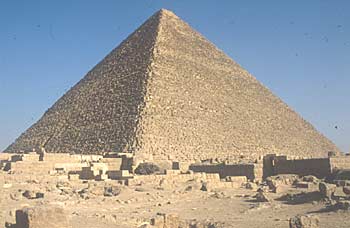 A pyramid is a polyhedron whose base is a polygon and whose other faces are triangles that meet at a common vertex, sometimes called the apex. A right pyramid has its apex directly above the center of its base. A square-based pyramid, like the pyramids in Egypt, has a square base and four triangular sides. A triangular pyramid, or tetrahedron, is made from four triangular sides; if regular, it is one of the Platonic solids. The volume of a pyramid is 1/3Ab h, where Ab is the area of the base and h is the perpendicular height of the apex above the base; the surface area is ps, where p is the base perimeter and s is the slant height.

Pyramidology, which (in its original form) claims links between Biblical prophesy and the construction of the Egyptian pyramids, stemmed from the publication in 1859 of The Great Pyramid: Why Was It Built? And Who Built It? by John Taylor, a British amateur mathematician and astronomer who was editor of The London Observer. Taylor became convinced that the Great Pyramid of Cheops, in its architectural proportions, embodied various remarkable and deeply meaningful geometric and mathematical properties. Chief among these, Taylor noted, was that the ratio of the perimeter of the pyramid's base to twice its height closely approximates the universal constant pi. The said ratio of the Great Pyramid gives a better value for pi than any found in written Egyptian records. The Rhind papyrus contains several problems that involve a multi-step method for finding the area of a circle from the diameter. This method implies a value of π equal to 256/81, or 3.1605, which is less than one percent larger than the true value of 3.14159... The values Taylor used for the Great Pyramid's base and height gave him a value of π correct to two decimal places. Further analysis of the pyramid's dimensions and various manipulations of numbers led him to conclude that the builders of the edifice had used a unit, which he called "pyramid inch" (equal to about 1.01 times a standard inch). Twenty-five pyramid inches made a "pyramid cubit," and 10 million pyramid cubits, Taylor pointed out, approximates the length of the Earth's polar radius. These and a series of similar calculations provided what Taylor considered to be adequate evidence that the Great Pyramid had been built as a model of the Earth. Taylor's fantastic claims may never have become popular had not Charles Piazzi Smyth, the Astronomer Royal of Scotland take up the cause of pyramidology and popularized it in Britain, the rest of Europe, and the United States, through a number of books including Our Inheritance in the Great Pyramid (1864) and Life and Work at the Great Pyramid (1867). (In the churchyard in Sharow, North Yorkshire, Smyth's grave has a pyramidal grave marker.) Others who espoused pyramid numerology have included Helena Blavatsky, the theosophist, Charles Taze Russell, founder of the Watchtower Bible and Tract Society, and Edgar Cayce, the American psychic, not to mention a variety of more recent pseudo-historians who have linked the Great Pyramid to everything from lost civilizations to UFOs. Yet Taylor himself was well aware of other, less dramatic explanations for the pyramid's dimensions, including the possibility that the pyramid had been constructed so that the area of one of its faces would equal the square of its height. The mathematical sophistication required to achieve this is not great and would have resulted in a ratio of the perimeter of the base to twice the height of 3.145 – about as close as the approximation of π used by Smyth in his studies. So, the ratio could have occurred as a completely coincidental by-product of a design that had nothing to do with the ratio of the circumference of a circle to its diameter. The pyramid is a rich source of the kind of data that Taylor and Smyth worked with, and it would be surprising if they had been unable to come up with some interesting number combinations given the extent of their efforts.