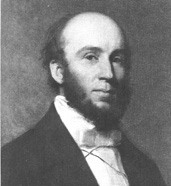 Charles Piazzi Smyth was an eccentric Astronomer Royal for Scotland who pioneered infrared astronomy by studying the heat emitted by the Moon, instigated Edinburgh's "One O'Clock Gun", and dabbled in pyramidology. Born in Naples, son of English amateur astronomer, Admiral William Henry Smyth, he was named after his godfather, the Italian astronomer Giuseppi Piazzi. In 1845, Smyth was appointed professor of astronomy at the University of Edinburgh and succeeded Thomas Henderson (1798–1844) as Astronomer Royal for Scotland based at the Calton Hill Observatory in Edinburgh. Shortly after his appointment, the observatory was put under treasury control and began a long period of under-funding. Because of this, most of Smyth's notable work was undertaken elsewhere.

In 1853, Smyth was responsible for installing the "time ball" on top of the Nelson Monument on Calton Hill to give a time signal to the ships at Leith. By 1861, this visual signal was augmented by the One O'Clock Gun at Edinburgh Castle and the two signals were electrically connected by a long cable.

Smyth recognized that cities were not the ideal place for astronomical observations, and, in 1856, founded the first high-altitude observatory on the site of what is now the Las Palmas Observatory in the Canary Islands.

Obsessed by the pyramids of Egypt, Smyth took up the mystical pseudoscience of pyramidology. He is the only person to have resigned his fellowship of the Royal Society, after they refused to publish his papers on this subject.

In 1888 Smyth also resigned as Astronomer Royal for Scotland in protest at the chronic under-funding and age of the equipment at Calton Hill. This brought events to a head and the observatory was almost closed before pressure from the Earl of Crawford brought about the building of a new observatory on Blackford Hill (1896) and the Calton Hill Observatory was given to the City of Edinburgh.