Fig 1. Refraction of a light ray on entering and leaving a glass block.

Fig 2. When light passes from one transparent substance to another, its speed changes. The bending which occurs when a beam of light crosses the boundary (between, for example, air and glass) obliquely, can be explained on the basis of the change in speed; one side of the beam is affected before the other. In the illustration, a beam passes through two glass blocks, first at right angles and then at an oblique angle.

Key
a) The length of a chosen number of wavelengths of the light in the air. Due to the reduction in speed, the corresponding length in glass is a/1.5, = 2/3a; the figure 1.5 is the refractive index of the glass.
i) The angle at which the light beam reaches the surface of the glass.
r) The angle at which the beam enters the glass.
b) The distance which the right-hand side of the beam travels in air after the left-hand side of it has entered the glass. The corresponding distance in the glass, as before, is b/1.5. From the two outlined right angled triangles, it can be seen that (sin i) / (sin r) = the refractive index 1.5; this is the basic law of refraction. 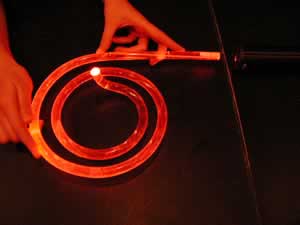 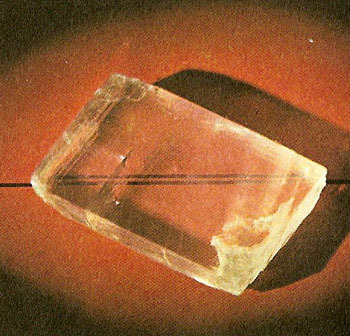 Fig 4. Double refraction displayed by a crystal of Iceland spar.

The angle of refraction depends on the light's frequency. Different frequencies refract at slightly different angles – a phenomenon known as dispersion. The most familiar example is the dispersion of white light into a spectrum of colors when it passes through a prism.

The phenomenon of refraction is used in the design of lenses and prisms, and of combinations of lenses such as eyepieces and refracting telescopes. In nature, refraction causes objects to appear higher in the sky than they otherwise would. Objects more than halfway from the horizon to the zenith (i.e., with an altitude greater than 45°) are almost totally unaffected; however, objects near the horizon can be shifted by a degree or so. It is also responsible for the well-known phenomena of rainbows, mirages, and atmospheric haloes.

A refractometer is an instrument that measures the refractive index of liquids for a particular color of light; the index is often very sensitive to impurities besides allowing easy determination of the proportions present in two-component mixtures such as water and ethanol.

The critical angle is the smallest angle of incidence, at a refractive boundary, at which total internal reflection occurs. In telecommunications, it is the angle at which a radio wave just misses being reflected by the ionosphere.

Double refraction, also called birefringence, is the splitting of a light wave into two waves, traveling at different speeds, by an optically anisotropic medium such as a crystal of Iceland spar (calcite), quartz, or topaz (Fig 4). In the phenomenon of double refraction a ray of unpolarized light is split into two rays plane-polarized (see polarization) at right-angles to each other. One is refracted in the normal way, the other with a refractive index that depends on the original direction of the ray.