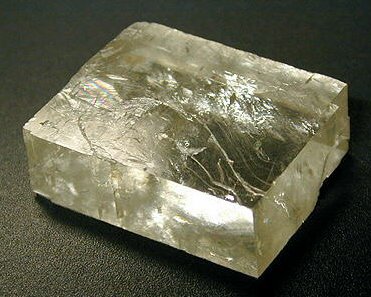 Iceland spar is a transparent crystalline form of calcite (calcium carbonate) that exhibits the property of double refraction, or birefringence. (The double image is easily seen by placing transparent calcite on printed text.) Furthermore, Iceland spar is a polarizing crystal, which means the two images will have different brightnesses depending on the polarization; for this reason, it is often used in experiments on optical polarization, in polarizing prisms, and in polarizing microscopes.

According to a study published in Proceedings of Royal Society,1 the Vikings probably used Iceland spar as a "sunstone" to find the position of the Sun and set a ship's course even on cloudy days. Sunlight becomes polarized as it passes through the Earth's atmosphere, and the sky forms a pattern of rings of polarized light centered on the Sun. Changing the orientation of calcite as light passes through it will change the relative brightness of the projections of the split beams, even when the Sun is hiding behind clouds or just below the horizon.

1. Ropars, G. et al., 2011. "A depolarizer as a possible precise sunstone for Viking navigation by polarized skylight." Proceedings of the Royal Society A: Mathematical, Physical and Engineering Science.