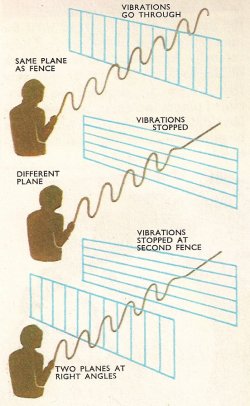 The vibrations in the rope will only pass through the narrow gap in the railings if the vibrations are parallel to the individual rails. Thus an up and down vibration is transmitted through the vertical railings, but is stopped by the horizontal ones.

Light is a form of wave motion, but as it travels at such a high speed (300,000 kilometers per second) it isn't possible to observe directly the way in which the moving waves vibrate. However, experiments show that the waves vibrate at right angles to the direction of the light beam, and because of this light is said to consist of transverse waves.

Since the vibration of light waves can't be seen, it's useful to see how other visible transverse waves vibrate. Such waves may be set up in a length of rope by repeatedly moving one end up and down (i.e. at right angles to the rope). The vibrations in the rope will pass through a narrow gap provided the longest axis of the gap is parallel to the direction of the vibrations. Thus if the rope is vibrating up and down, the motion will be transmitted through a vertical gap. However, if the rope also passes through a horizontal gap the vibrations can't pass through this.

Certain crystals, in particular transparent crystals of calcite (a form of calcium carbonate) known as Iceland spar, have the property of polarizing light. The ability of such crystals to polarize light can be tested by passing a ray of light through two crystals of the substance. Each crystal can be thought of as containing a number of very narrow slits parallel to each other. These "slits" are so narrow that only the waves whose vibrations are parallel to the slits can pass through.

Light can be polarized by reflection as well as by refraction. In fact the French physicist E. L. Malus (1775–1812) discovered this property of light after observing sunlight reflected from windows. Malus' discovery can best be illustrated by means of a simple experiment. Two mirrors are arranged parallel to each other, forming a kind of periscope. When one of the mirrors is rotated it is found that the amount of light reflected from the second mirror gradually decreases to a minimum (it disappears completely in one position – but this is very difficult to attain) and then increases again. What is happening is that on reflection at the first mirror the vibrations in all but one plane are absorbed. In other words, the reflected beam is polarized. How completely the light is polarized depends on the angle of incidence. As the proportion of light reflected from a surface is quite small, this is not a very effective method of obtaining polarized light, so light is usually polarized by refraction.

One quite satisfactory polarizing medium has been manufactured and is marketed under the Polaroid trade name. It comprises a cellulose nitrate film containing very small crystals of iodoquinine sulfate. In manufacture, these tiny crystals are made to line themselves up in one direction so that they behave like crystals of Iceland spar.

Polaroid disks can be used to produce polarized light in much the same way as with other polarizing media. If ordinary light enters the film, the light emerging is polarized – almost all vibrations are right angles to the favored direction have been absorbed. That the light has been polarized can be shown by rotating a second Polaroid disk in the path of the light emerging from the first. As the second disk is rotated a point is reached at which where virtually no light is transmitted – the greatest amount of light is transmitted when the disk is at right angles to this position. Polaroid has many uses, not the least of which is sun glasses. With these the glare caused by the sun's light being reflected from the road or water surfaces, etc., is considerably reduced. The reflected light is already polarized so that only that portion of the light which is polarized in the favored direction is transmitted through the Polaroid disk.


Optical activity and the polarimeter

Solutions of various sugars, including cane sugar (sucrose) and of certain other organic substances have the property of rotating the plane of polarization of light passed through them. The extent of the rotation is measured with an apparatus called a polarimeter or saccharimeter. This comprises a source of monochromatic light – usually a sodium lamp, a means of polarizing the light (a polarizer), a tube to hold the sample, and a means of checking the plane of polarization (an analyzer).

To use the apparatus the tube is first filled with water, the lamp switched on and the analyzer rotated until no light is seen to emerge from it. The polarizer and analyzer are then said to be crossed. The water in the tube is then replaced by the solution under test. The analyzer is again rotated until it is again crossed, and the angle through which the plane of polarization has been rotated is then noted. Some substances (e.g. d-glucose) cause the plane of polarization to rotate in a clockwise or right-handed sense. These are said to be dextrorotatory. By contrast, levorotatory substances (e.g. l-fructose) cause the plane of polarization to be rotated in an anticlockwise or left-handed sense. Such information provides clues to the structure of these compounds. The amount of rotation indicates the strength of the solution.