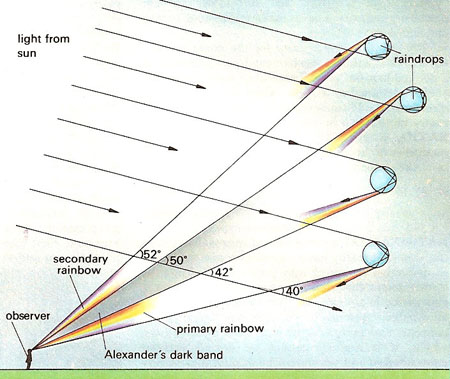 The origins of the primary and secondary rainbows. The concentration of light in the rainbow arcs results from there existing certain preferred angles of deviation for light rays internally reflected within spherical water drops. These angles are about 139° for one internal reflection and about 129° for two internal reflections. Dispersion gives rise to color-fringe effects about the direction of mean deviation and interference effects cause certain other color fringes. The band between the primary and secondary rainbows is noticeably darker than the rest of the sky (Alexander's dark band). 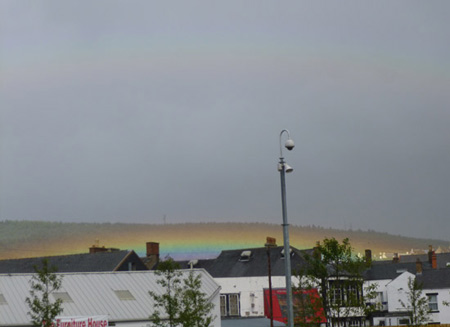 A low-lying rainbow with secondary rainbow over the town of Penrith in Cumbria, England.


A closer look at rainbows

For a rainbow to be formed, certain weather conditions are necessary. The day must be sunny and the Sun quite low in the sky. There are no noon-day rainbows where the Sun is directly overhead. The best times are in the morning or evening. Nor is it possible to see a rainbow while facing the Sun. The person seeing the rainbow always has his back toward it. Some distance in front of him it is raining. It is obvious that raindrops are responsible for this colored effect because it is equally possible for rainbows to be formed under suitable conditions by waterfalls, fountains, or the spray from a garden hoe.

The sunlight falling on the rain consists of a mixture of radiation of various wavelengths. Red light has the longest wavelength and violet the shortest. Intermediate between red and violet lie orange, yellow, green, blue, and indigo. This mixture of radiation is colorless (white) when it falls on the raindrops. Raindrops are almost spherical, held in shape by the force of surface tension acting on their surfaces, and behave like lenses. As a ray of light enters a water droplet, it is refracted. The violet light is bent the most and the red light not as much. The effect of this is to split the white light into its component colors. When the radiation reaches the far side of the droplet some leaves the droplet but the surface reflects part back into the droplet. Again when the reflected light encounters the surface, some radiation is refracted as it leaves and the rest is reflected. With this refraction, as light is passing from water to air, the red light is bent more than the violet. The red light comes into the observer's eye at a larger angle than the violet light, i.e., the red seems to come from higher up than the violet.

Because of this, the top of the rainbow appears red and the bottom violet. Such a rainbow is known as a primary rainbow. It is formed by light which has only bee reflected once inside the water droplets. Individual colors of the spectrum reaching one observer come from different raindrops.

Double rainbows are sometimes see. There is a bright primary rainbow (red at the top, purple underneath) and some distance above it another much fainter secondary rainbow. The time the colors are reversed: the purple at the top and the red at the bottom. Secondary rainbows are formed by light which has been reflected twice inside the raindrops. After two reflections, the violet light makes a larger angle with the horizontal at the observer's eye than does the red light. Therefore this time the purple seems higher up than the red. When the primary rainbow is very faint it is often impossible to see the secondary rainbow.