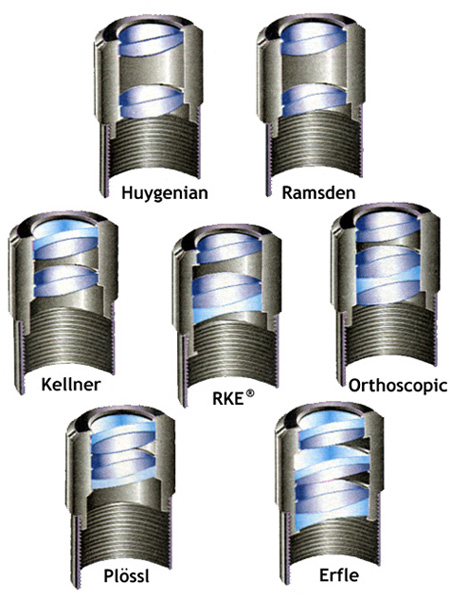 An eyepiece is a combination of lenses, also known as an ocular, used to magnify the image formed by the objective of a telescope. In practice, eyepieces contain at least two lenses: the field lens, which faces the objective and collects the light from it, and the eyelens, which faces the observer and magnifies the image. A field stop (a circular aperture) inside the eyepiece limits the field of view, helping to give it a sharp edge. There are various types of eyepiece design, from very simple achromatic lenses to complex eyepieces with many optical elements. Usually, the more complex an eyepiece, the more optical corrections, and the better eye relief and wider field of view. On the other hand, adding many glass surfaces dims the image and may also increase internal reflections, or "ghosting."

One of the earliest compounds lenses, introduced by Christiaan Huygens in 1664. It uses two plano-convex lenses, both mounted with the convex surface toward the objective. Huygenians offer good eye relief but suffer badly from spherical aberration and various other defects. They are often included with the least expensive and least effective amateur telescopes but are only useful at focal ratios faster than about f/12.

Another old design, invented by the English instrument-maker Jesse Ramsden (1735–1800) in 1782. In this case, the two plano-convex lens both have their flat sides facing outward. Ramsdens are less prone to spherical aberration than are Huygenians and are free of coma, but fare badly with regard to chromatic aberration and have poor eye relief and prominent ghosts. Their apparent field of view is quite small, as little as 30°, and they don't perform well at focal ratios shorter than about f/9. However, good ones are surprisingly effective at longer focal ratios for lunar, planetary, and double-star work.

A three-element, fairly aberration-free improvement on the Ramsden thanks to the addition of an achromat for the eyelens. Sometimes called achromatic Ramsdens, Kellners have a fairly wide field of view, up to 50°, and good eye relief, but need excellent internal coatings to minimize ghosting. They work best in long focal length telescopes and offer a good balance between performance and economy.

A four-element eyepiece (typically with a simple lens nearest the eye and a cemented triplet further away), more expensive than a Kellner, considered among the best eyepieces for lunar, planetary, and double-star work, and a good choice for eyeglass wearers because of their long eye relief. Although an excellent all-round performer offering crisp images, the orthoscopic has a somewhat restricted field of view, in the 35° to 50° range. It was invented by the German physicist Ernst Abbe (1840–1905) in 1880. See also Brandon eyepiece.

A four- or five-element design (consisting of two doublets, sometimes with an intermediate lens) offering excellent performance, especially in the 15- to 30-mm size range. Plossls provide good color correction, flat field, adequate eye relief (except for 10 mm and shorter lenses), and a moderate field of view (40° to 50°); some astigmatism is present, especially at the edge of the field.

Eyepieces that offer a field of view of 60° to 80°, providing spectacular panoramas of the night sky, but at some cost, both financially and observationally. They often won't work in certain telescope drawtubes and with certain telescope designs; instruments lacking good optical performance around the edge of field, will have their worst traits emphasized; and at high magnifications with some telescopes, some ultra-wide eyepieces are unusable.

The earliest type of wide-field eyepiece to be developed, in 1917 by Heinrich Erfle (1884–1923). Erfles uses three lenses, at least two of which are doublets to give a field of view of up to 68°. Although they suffer from ghost images and astigmatism at the edges of the field, which makes them unsuitable for planetary viewing, they are relatively inexpensive.

A short-focal-length version of the Erfle, giving high magnification and a field of view of up to 70°. Königs may contain anywhere from four to seven simple lenses, grouped into various combinations of cemented doublets and singlets. They are named after the German optician Albert König (1871–1946).

A seven-element design, introduced in 1982, with a remarkable 82° field of view. Naglers come in 2-in barrel size only, and are heavy – up to 1 kg. Although expensive, they are an excellent choice for observers with very fast focal ratio telescopes (up to f/4).