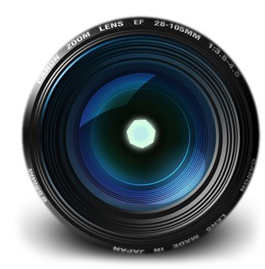 An aperture, in general, is any opening through which light, other forms of electromagnetic radiation, or streams of particles can pass. In photography, the aperture is a hole that allows light to pass through the lens onto the recording surface. A diaphragm aperture works like the iris in the human eye. It can be widened or narrowed automatically or according to a series of manually adjustable values called f-numbers or f-stops. The individual f-numbers represent the focal length of the lens divided by the diameter of the aperture. As the aperture narrows (larger f-number), the depth of field increases.

The term aperture is also applied to the diameter of the main mirror in a reflecting telescope, the objective lens in a refracting telescope, or the dish of a radio telescope. The larger the aperture, the greater the ability to collect light and detect faint objects, and the greater the resolving power. In the case of amateur telescopes, a rough guide for estimating the magnification that an aperture can handle well is 2× per mm, or 50× per inch.

Aperture synthesis is a method of combining signals from a collection of individual antennae or telescopes to provide an image with a resolution equivalent to that of a single telescope with a size roughly equal to the maximum distance between the individual antennae. The technique was first used with arrays of radio telescopes but is now also used routinely for making high-resolution optical, infrared, and submillimeter observations.

In the simplest case, two antennas are used as a radio interferometer, and the phase and amplitude of the combined radio signal are measured continuously. As the Earth rotates in the course of a day, one antenna is automatically carried around the other, effectively sweeping out a ring. On successive days the separation between the two antennas is changed, so that a large elliptical area is gradually covered. When the records are combined in a computer, it is possible to produce a radio map of the section of sky under observation with the detail resolved as if the telescope aperture were the size of the total area swept out.

In practice, more than two antennas are normally used to speed up the process and give greater flexibility. It is also possible to combine observations made at different sites, separated by thousands of kilometers.