Fig 1. Principle of a radio interferometer. 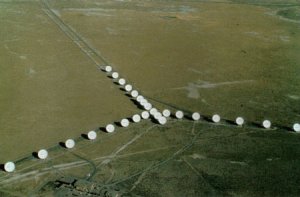 In most interferometers the beam of incoming radiation is divided in two, led along paths of different but accurately adjustable lengths, and then recombined to give an interference pattern. Perhaps the best known optical instrument is the Michelson interferometer devised in 1881 for the Michelson-Morley experiment. More accurate for wavelength measurements is the Fabry-Pérot interferometer.

Astronomical interferometers consist of linked telescopes which collect the electromagnetic radiation arriving from an astronomical object along two or more different paths and combines the results to form an interference pattern. The resulting resolution is much higher than that achievable by the component telescopes working independently.

A Fabry-Pérot interferometer is a type of optical interferometer that, when placed in front of the diffraction grating in a spectrograph, can reveal fine details in the spectrum of a galaxy, nebula, or other extended object that are beyond the scope of a grating alone (Fig 3).

Light from an object is passed through an etalon – a pair of partially-silvered, parallel glass plates separated by an adjustable air space – that uses interference to transmit only a narrow range of wavelengths. By changing in steps the gap between the plates, it is possible to scan the spectral region of interest and produce an image of the object at each chosen wavelength. The design was conceived by French physicists Charles Fabry and Alfred Pérot (1863–1925) in the late 19th century.