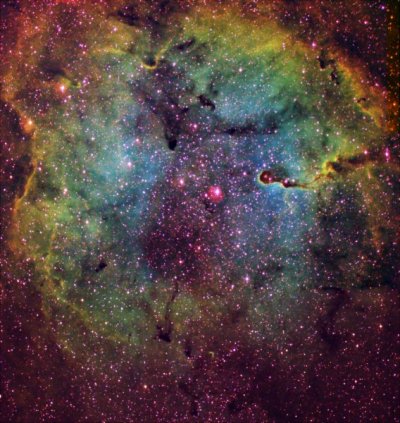 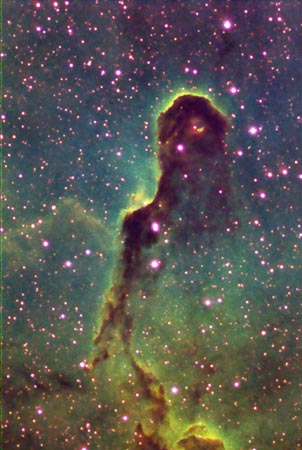 When cloudlike material in space is patchy, or of a form that is difficult to categorize as a particular type of nebula, is referred to as nebulosity.

Originally, the term "nebula" (a Latin word meaning "mist") was applied to a variety of extended objects in the sky, including what are now known to be external galaxies; for example, the Andromeda Galaxy used to be, and occasionally still is, called the Andromeda Nebula.

A dark nebula, also known as an absorption nebula, is a relatively dense (up to 104 particles per cm3) interstellar cloud of matter whose dust particles obscure the light from stars or bright nebulae beyond it and give the cloud the appearance of a starless region (Fig 2). Such nebulae have the appearance of holes in the sky. They range in size from globules, a few thousand astronomical units across, to sprawling regions of starless darkness such as the Coalsack.

A diffuse nebula is an irregularly shaped cloud of interstellar gas or dust whose spectrum may contain emission lines, in which case it is an emission nebula, or absorption lines characteristic of the spectrum of nearby illuminating stars, in which case it is a reflection nebula. Well known diffuse nebulae include the Orion Nebula, Lagoon Nebula, the Trifid Nebula, and the Omega Nebula.